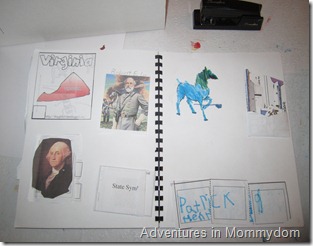 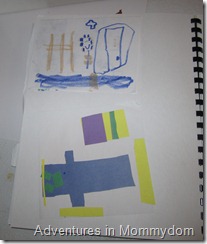 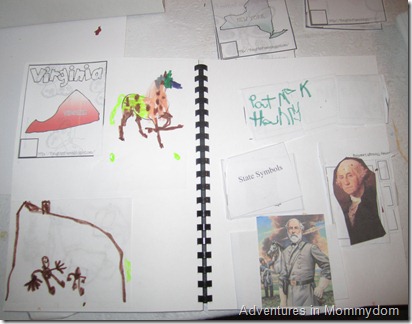 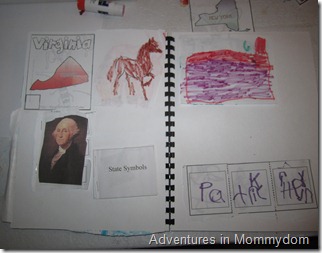 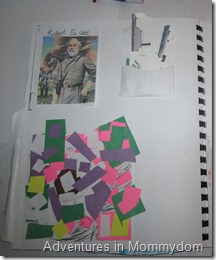 George Washington– I’m still amused at how much they liked making fake teeth.  But I guess any activity with play dough is fun.  The piece here is a 3 page book with one fact on each page.

Chincoteague pony– or in the boys’ case, the amazing Technicolor pony

Patrick Henry– Two months later my kids still remember that he failed as a farmer and a store keeper but he was good at arguing.

Robert E Lee- I’m still amused and find it interesting that he was actually against slavery, but felt he should help his fellow Southerner.  Imagine how much sooner the war would have been over if he had fought on the North’s side.  Or maybe he was a child of Rome, and that’s why he fought on that side (okay, who got that reference?).  If you want pictures to make your own piece, they can be found here.  I just folded half a piece of paper and had them write a fact about him.

Civil War soldiers from Junior General – I also found a copy of the Monitor and the Merrimac, which I was very happy to find.  They’re two of the famous battleships from that war, and I was very sad my library didn’t have any good books on the subject.

Promise Quilt– I think this was almost Princess’ favorite activity, cut paper into lots and lots of small pieces and glue it on, yes please.