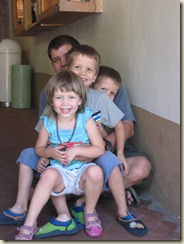 And in the middle of those mountains is the Old Town on Albuquerque, you can kind of  see why people might settle here.  We spent a few hours in the Old Town area and got to see some of the local history, and get a few birthday presents for friends and family.  There’s some truly gorgeous jewelry here, and that says something from someone who doesn’t really wear much beyond a necklace. 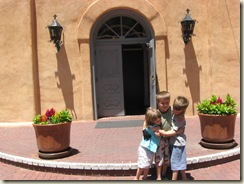 We got to see one of the missions that was founded with the town, and learned that it was named after a Spanish Duke with a very long name.  This mission is still a functioning Catholic Church, and had just had services that morning, and before going in we had a short talk about how we act in this church.  “This is a quiet church, and we’re not going to be loud or run.” 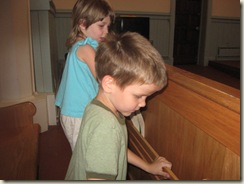 The kids were intrigued by the bar they had for kneeling on for the prayers, because our church doesn’t have these.  So, I explained that at this church they kneeled for praying and so we each took a turn kneeling and saying a prayer to God (and I’m not Catholic, so this is just my best understanding of Catholic tradition, feel free to correct me). 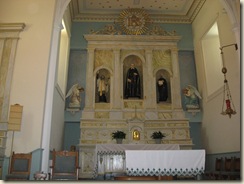 We talked about who the different statues were and why there were important.  To be honest, I wasn’t really sure of who a lot of them are, I’m just not that familiar with the Catholic Saints to say who all of them were.  I could recognize Saint Francis (who’s not in this picture), but I’m not sure who is in this picture. 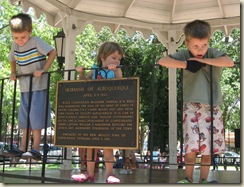 Then the kids took a second to pose for me in front of this sign put up by the Sons of the Confederation (some group like that), in honor of Albuquerque withstanding the Union army attack.  Jeff and I had fun disagreeing on why the Confederates were triumphant.  I thought it was because Defenders tend to have more to lose and fight better.  Jeff thought it was because the Union army was only willing to take the town if they could do it with minimal casualties.  So, we had fun discussing our random bit of history trivia with no real knowledge of the battle. 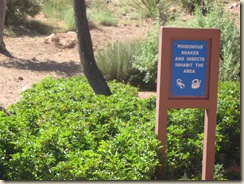 We left Albuquerque (I’m having fun reveling in my newfound knowledge of how to spell it), and headed on to the Arizona border.  We enjoyed watching the mountains and the like pass by and enjoyed looking at the rock formations.  We go to the Arizona state border and I was very disappointed to find out the Welcome Center was closed for the 4th of July.  Oh the sadness and horror of it all!  And, we also saw a sign that convinced me we’re not moving to Arizona.  I’m thinking I don’t want to move somewhere that has to warn people about poisonous creatures as it welcomes you to the state.