It’s always nice when things work out well, and this week things worked out perfectly.  We reached the Ancient Olympics just as the Olympics were gearing up in the real world, so it made our ancient Olympic activities for homeschool history even more fun for us. 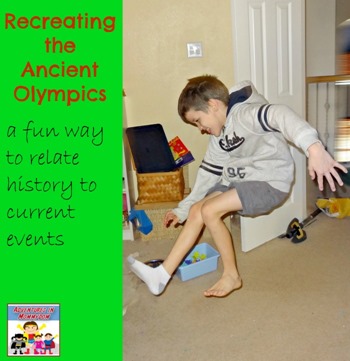 First we read the book to see what happened in the Ancient Olympics.  We learned the Greeks treated their Olympians much like we treat our modern day Olympians, they’re heroes to be fawned over and obsessed over. 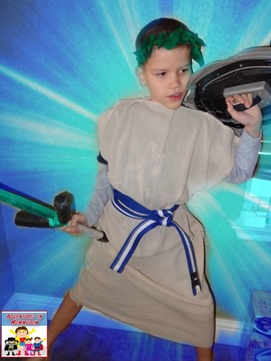 Look at that noble hero there.  I mean he practically walks on water and has everyone fawning over him.

We started off our events with the javelin toss, and the kids loved getting out their spears from Duct Tape Warfare to see who could throw the farthest.  Batman won that competition by a hair.   From there we went to our next event:

Racing, who wouldn’t love to race their siblings, especially when I weighted it so Princess stood a fighting chance.  She beat out Batman by a hair, poor Superman tripped for a second. 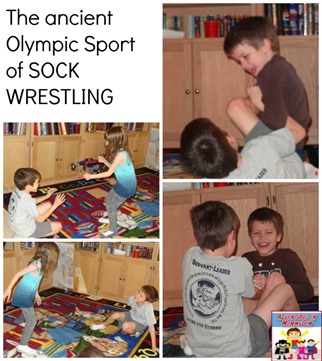 Then we did the ancient sport of sock wrestling, freely stolen from Phyllis’ post on the Olympics.  This event ended in a tie between the boys, Princess gave up because she decided it was too violent.

Then came the long jump which Superman won in a jump off.  It was a lot of fun for me to get the pictures of this one.

At the end of it all we made our own victory wreathes to wear.  Which the kids wore briefly and then headed off to play, but it was fun.  It’s super simple to make.

(these are my ABSOLUTE FAVORITE SCISSORS), and for the kids who aren’t allowed to use my nice ones: Fiskars Scissors (I’ve had the best quality from Fiskars and ONLY buy them), green Chenille Stems

Pose in your awesome creation, while looking somewhat bemused at your Mom.

Check out some more ideas here: