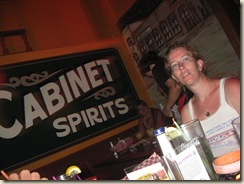 So, I’m doing this a bit backwards.  I’m writing about today, and then going back and doing tomorrow.  Why?  Because I have some fun cool videos to share of bear cubs playing.  Actually, these are just a few of the videos, because if I did them all it’d take FOREVER to load.

And look!  It’s  a rare Ticia sighting, Batman had fun playing with my camera and took this picture of a very sun-burned me.  Seriously, it really hurts.  A LOT. 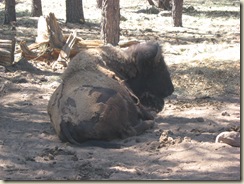 So, we went to Bearizona today.  It’s one of those drive through wildlife areas, and I was going back and forth about it, but it was really cool, and apparently it’s this brand new place that opened up in the Grand Canyon area that’s run by a family.  We had a lot of fun driving thorough and seeing bison, bears, sheep, burros, and a couple of different animals. 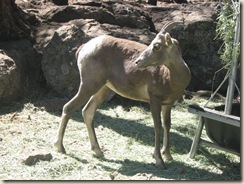 But, funny story about this place.  So obviously they have herds of animals that are loose.  Well, we drove through it 0nce, and the kids were so excited by seeing the bear cubs, they HAD to drive through again to see the big bears again.  So, as we’re driving through we get into the burro enclosure, and there’s these two burros who are biting at each other, and we joked about how they’re fighting.  Then, Jeff and I notice that the boy burro is, ummm……, 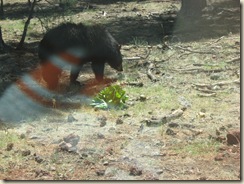 Luckily for us the kids did not seem to notice the rather energetic attempts at the expansion of the herd, so we didn’t have to get into THAT discussion.  Phew, crisis averted.  Of course that also meant that Jeff and I spent a fair amount of time after that with nervous giggles. 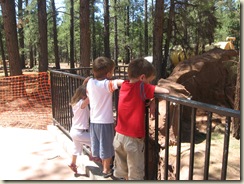 But, the best part of this tour, and the reason I’m waiting forever for videos to upload was watching the bear cubs play.  I think we easily spent 30 minutes watching the cubs play and laughing at them, and then coming back and watching some more. 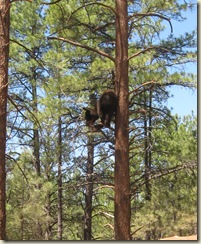 Some things I learned about bears and bear cubs.  1.  Bears like fruit, not just that but the eat the whole thing, and they really like oranges.  2.  Bears eat lettuce.  3.  Bear cubs climb trees fast.  I watched those cubs get 30 feet in the air in less than 5 seconds.  4.  Because they move so fast, it is very hard to get a good picture of them (that and all of the tree branches in the way).  Oh, and 5.  Bears chew on trees a lot, to get to the insects they like to eat.

So, Jeff and I talked about how cool it is that they’re going to open a hotel there in a few years, so you could just stay there.  I’m thinking I remember reading about a similar type of hotel somewhere in Texas that has one of  the drive through wildlife things, so maybe I’ll look into that and see if I can surprise Jeff one weekend with staying there.  Because with the reaction of the kids to this one, I think they’d love it. 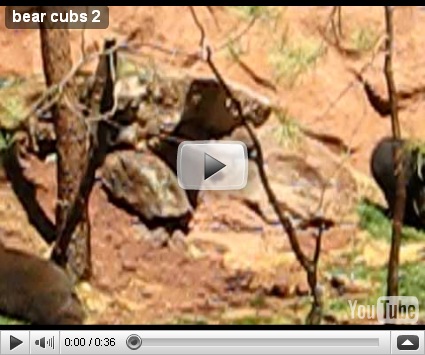 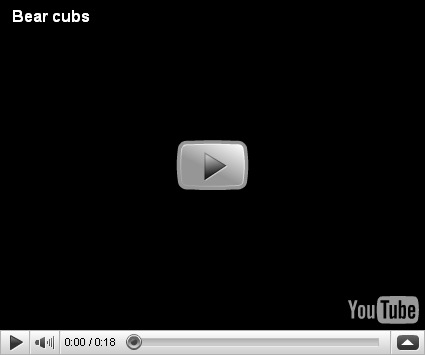 Awesome!  Video is done loading, and I think now I’ll get started on the other post, but I’m also thinking a hot bath to help the sun burn is in order.

And, obviously Jeff figured out how to fix my lap top because he’s just that smart.  Apparently I had a trojan virus and some such or other and a pretend virus program that was causing the whole problem.  All in all, very annoying.  I need to figure out where it came from because this is the same one I got on my lap top, but that was easier to solve.  But, problem is solved.  I don’t know how much commenting I”ll be doing for the next few days, because it’s going to be long nights now that we’re here in California. 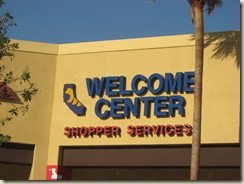 I almost forgot to tell this story!  I can’t believe that.  So, as we got to the California border I got all excited thinking about going to the Welcome Center, and finally almost being to our destination.  Then as we get to the border, we get routed through a customs checkpoint to find out if we’re bringing in any fruit/vegetables/plants/or animals.  So after the rather unfriendly guy quizzed us, we continued on.  I’m looking for my welcome center, and it’s nowhere to be found.  But, we drive through the desert, and it’s a long ways before we see any sign of people really.  Finally after 150 miles we see, California Welcome Center this way.  So, we follow the signs to an outlet mall.  We get to the welcome center and it’s also doubling as the information center and bathrooms for the outlet mall.  I get in there and the lady somewhat acknowledges me.  I start looking at the brochures in there, and most of them are for Southern California, according to the Welcome Center there is Orange County, San Diego, L.A., and………  Las Vegas?  No, really they had information for Las Vegas, Arizona, New Mexico, and Utah in that dinky little area that is smaller than my hotel room.  I was rather unimpressed.  But, it makes for a great story to embarrass my friend with.  She was amused the fruit police were back in business (apparently they periodically open it to protect the delicate California environment, or some such).