Everyone can tell you about the “shot heard round the world,” but do you know what led to that shot?  What were the steps that drove us inexorably from a colony to an independent nation?

It certainly wasn’t a straight shot, and makes for a fascinating bit of homeschool history lesson as we look at the Boston Massacre and the early steps to revolution.

But where does the Boston Massacre start?

First you need to back up a little bit.  England had passed a series of taxes and laws the colonists hated.  They were spoiling for a fight, and went to great lengths to start one.  It all came to a boil when a regiment of soldiers tried to calm a mob, and the soldiers in a panic fired into the mob.

Look at this masterful stroke of propaganda by Paul Revere.  Even what we call this event today is a stroke of genius designed to get people mad.  I go into a lot more detail in my Paul Revere unit study on some great discussion questions.

But this is the masterpiece that starts all of this.  I wanted the kids to get a better idea of how hard it is to engrave, so we made our own engravings to print with.

Of course you can’t learn about a master engraving like that without trying your hand at it.  To give it a try yourself you’ll need a few supplies:

clean styrofoam tray (I asked our local HEB store, and they gave me a few empty trays), bamboo skewer*, poster paint*, a foam paint brush* (yes I do buy this in 25 packs, because these are great for spreading mod podge or similar types of things) or a brayer* (I’ll admit I just use the foam brush, but figure some of you might have a brayer)

The kids set to work carefully etching their creations into the foam.  We discovered it was harder than it looks, to help you out, here are a few tips:

Once your design is done paint a thin, emphasis on THIN layer of paint over it.  Press your design onto the paper, and you’ve created a paper engraving.

My kids’ designs were mostly poking holes to make patterns, but I still think it turned out rather interesting.

What else happened in Boston besides the Boston Massacre?

We followed up the talk of the Boston Massacre with some general talk about what happened in Boston before the American Revolution.  To help them see just how much was going on I printed off this map from Time Travelers: American Revolution*.  But the full details of those events need to be a whole different post.

To give you a hint of that future I give you: 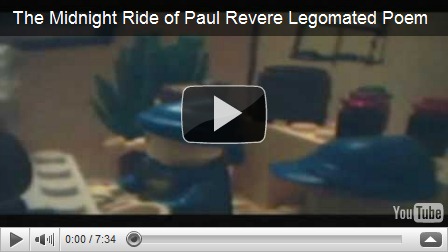 More information on the Boston Massacre, Paul Revere, and the steps to the American Revolution