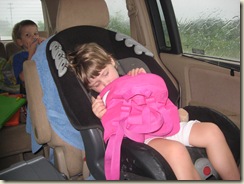 Does that sound suitably cryptic?

I remember reading a Batman comic as a kid, in it Robin has grown up and is now Nightwing, and has come back the Batcave.  He looks to the new Robin and says, “I’d always heard you can’t go home again, I guess that’s true.”

And to those of you who are wondering, yes I am that much of a comic book nerd. 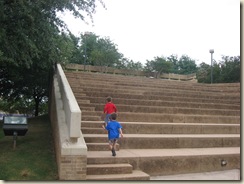 Well, today we’re staying in the town I went to college in.  And this evening we wandered around my alma matter, Abilene Christian University.

It was more than a little surreal to me.  Since I graduated they’ve added a couple of buildings and completely redone some of the buildings I spent most of my time in.  It was odd to see the redone campus center, and to see the giant building their creating right now in honor of the last president of the school. 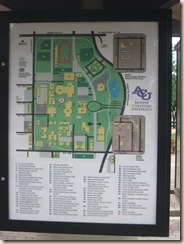 The picture to the left is rather illustrative of my feeling.  When I went here there wasn’t really a need for a big huge map.  There were maybe 10-15 buildings total, and it was fairly easy to figure out how to get around.  This map had 40 something things labeled.

For all the surreal feeling for me, the kids had a lot of fun running around, and Jeff was rather indulgent. 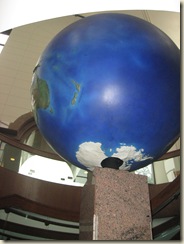 I wandered around with a sense of unrest and not quite loss, and we wandered into the Bible building and climbed down the stairs and looked up at the globe.  Usually it’s lit up with dots of all the missionaries around the world, but today it was turned off.

As I looked up at it, and wished I could show the light of God spread around the world, another pair of lost people came in.  The Mom was in the process of having her son go over and stand next to the globe, and I asked if she wanted me to take their picture.  I found out she had attended a few years before me, and then transferred to UT in Austin.  I told her I lived in Austin, and found out she did too.  It was a nice feeling of “it’s a small world,” and helped me with my feeling of lostness. 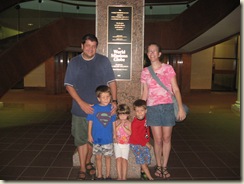 So because of that moment of serendipity, you get to see a family picture.  Here we all are in the bottom of the Bible building underneath the globe. 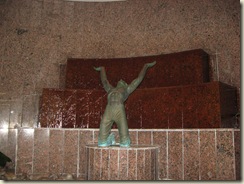 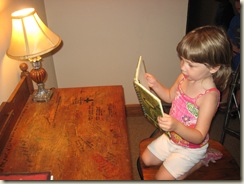 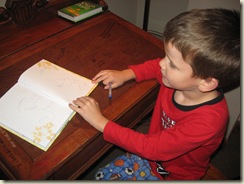 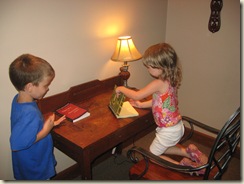 What was going to be our final stop was the Quiet Rooms.  These are a section of study/prayer rooms in the Bible building.  I spent many an hour here in this quiet area studying and reading.  Come finals there was never a free room.  It was fun to read through the journals put there and see the prayers of different students in many languages (I have no clue what the prayer in Chinese said, but it looked pretty).  Batman added his own prayer to one of the journals. 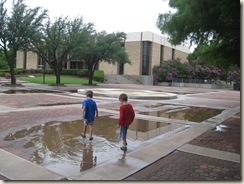 We continued our way through the campus, stopping to splash in puddles along the way.  I still am amused at the “new Gata fountain” (new as in almost 15 years old now).  When I first started at the campus it was an actual fountain with water in it.  The tradition was on your birthday you’d get thrown in the fountain, clothes and all, regardless of the time 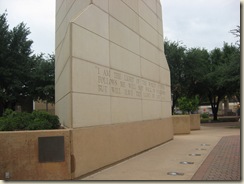 of year.  Then, my sophomore year (does anyone else love that sophomore means wise fool?) they changed it to this new thing, where when Abilene isn’t in a drought it shoots up water, but there’s nothing to be thrown into, and not really much of anything for the Gatas to gather around and sing at Homecoming, but oh well. 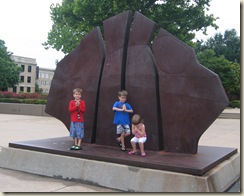 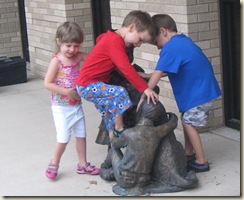 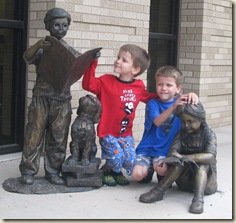 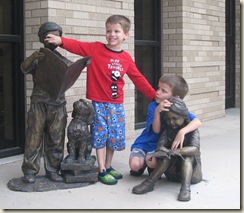 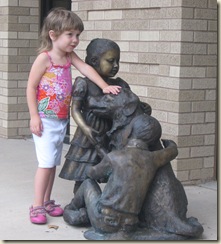 I got a kick out of seeing the education majors are no longer relegated to the basement of the English building, now we get a whole building, complete with lots of cool statues the kids had fun posing and goofing off with.  It was a fun ending to the quick campus tour.