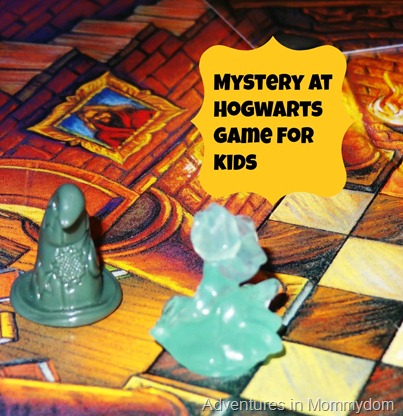 Ages and ages ago when Harry Potter and the Sorcerer’s Stone came out, a friend gave me Harry Potter Mystery At Hogwarts Game

for my birthday.  It plays a lot like Clue, but there’s some fun differences added in. 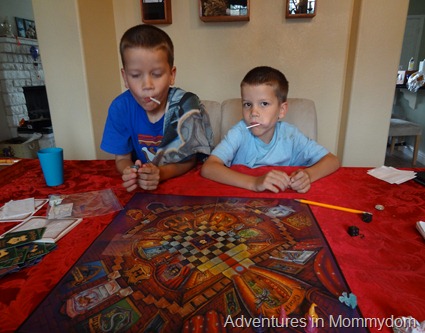 As you can see, the game board is set up to be the school.  You roll two dice and move around the board gathering clues to figure out who cast the spell and in what room (see, just like Clue).  That part’s the same.  Here’s where it’s different. 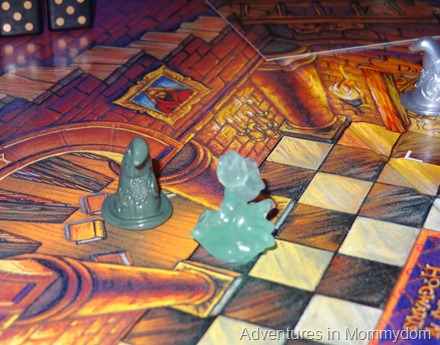 You can choose to move the ghost instead of yourself and make people reveal cards to you without making guesses.  Also, if you roll a “one” (which is a Hogwarts seal), you draw special cards that can protect you from effects, reveal hidden passages, or complete missing stairs. 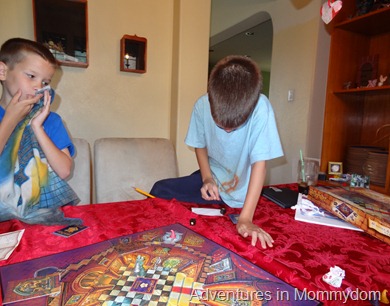 If you’re familiar with Clue, than you already know how the game works, but this adds in the extra layer of strategy with the ghost and some more randomness with the Hogwarts cards.

I would say it probably requires at least a mid-second grade reading level to play it well because my boys struggled from time to time to find the right names.  It also requires kids who don’t feel the need to tell everyone what they have and can hold their cards without showing them to EVERYONE.

On the random to strategy side, I’d put it closer to random.  Movement is based on a die roll and the cards you get at the beginning are completely random.  But, it’s a lot of fun.