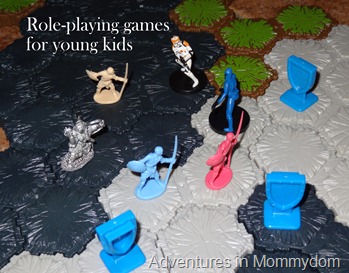 Theoretically every Friday night Jeff and I get together with a few friends and we play RPG’s.  We make up characters and play through scenarios based on what our character would do.  My boys are incredibly jealous of this and have asked when they can do it too.

Our standard reply is: “You have to be able to read well on your own and be able to do math in your head.”

Each time they ask this I notice they’re suddenly working much harder at their math and reading. 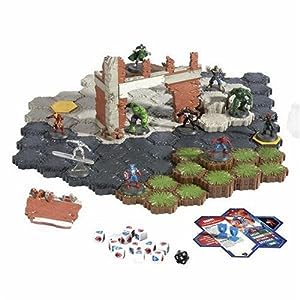 and it’s a fun game, but way too hard for my boys.  It’s designed for people who know a lot more math and can remember more rules.  The rule book says 8 and up, but I’d guess more like 10.

But, my boys love it.  After rounds and rounds of their made up rules, consisting of “If I shoot you, your guys loses and is dead, if you shoot me it misses.”  That’s not really fun for me.  We now have some set rules.

Their guys have 3 hit points.  So it will take 3 hits for them to die. 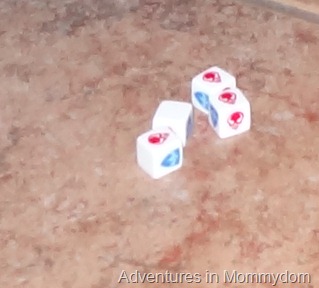 We say the shields count as defense, and the heads as hits.  Blanks are nothing happened.

So, if I roll one head and two shields, but Batman rolls two shields and two heads; then I do not hit him.  He successfully blocked my attack.

Bad guys get one action a round.  They can either move or hit the good guys.

Good guys get two actions a round. 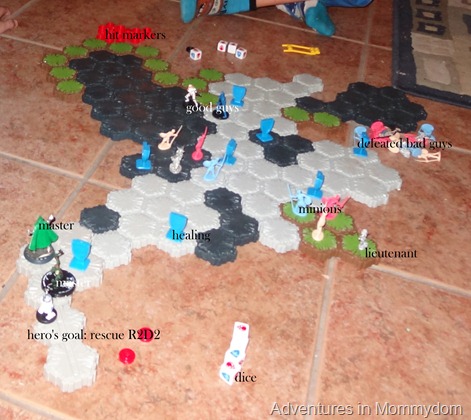 The blue things on the board are from the game, they have numbers on them from 1-3.  We used those as healing.  If your character was hurt then you moved onto that space and healed that much.

I have different levels of minions, masters have 4 hit points, lieutenants have 3 hit points, and minions have 2.  They roll the same number of dice as they have hit points.

The boys love this, and I love it because I can sneak in a lot of math practice without them noticing, and a healthy does of strategy and higher order thinking skills.