We’ve started playing games on Fridays, and one of our big hits is Carcassone, we’ve made some adaptions to it so it’s playable by kids, so I now call it: {affiliate link} Carcassonne for kids. 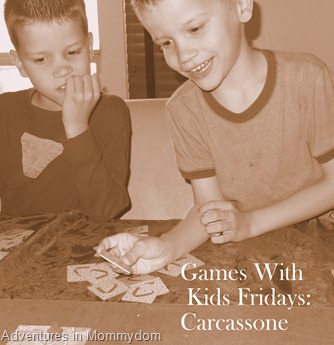 I mentioned buying Math Gym a month or so ago, and how much we enjoy that, so I’ve got math covered, and actually almost any game could be called using math.  Now this one is a higher order thinking game, it employs strategy, but it’s low level enough that with some modifications kids can play it.  So this is our version of Carcassone for kids, I think there is an actual official one as well.

Carcassone is a tile laying game that has a little luck built into it based on what you draw, but it’s more controlled randomness than say Monopoly.

You take turns going around building cities, roads, and farms and get points for completing them based on how big it is.  There are several expansions that change the game play, but for ease of play with the kids we don’t really use those. 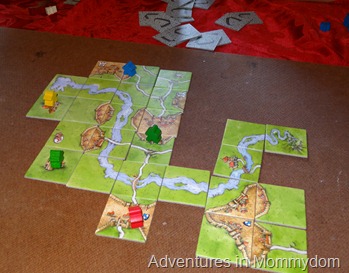 1.  No farmers.  Farmers to me is the hardest part of play and the most chancy.  They aren’t scored until the end of the game where they get points for each city they feed.  For little kids this is too long to wait to get their points.  Finishing a town or a monastery is hard enough for them. 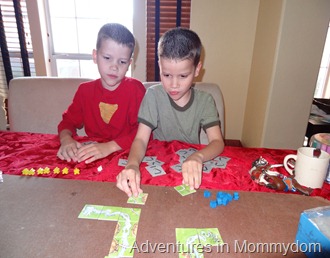 2.  Draw two tiles and choose one to play.  This gives them a bit more control of what they’re doing and also forces them to think what is their best play.  Do they want to build a road which gets them 1 point per tile or work on a city which is 2 points a tile? 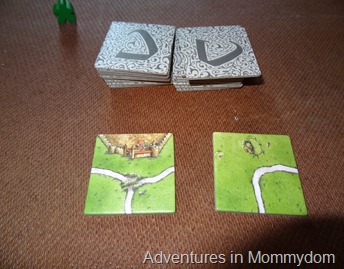 3.  Limit the number of turns.  This is more of an attention span thing.  We set it up so everyone gets 10 turns, and they know how many turns are left.  This helps keep the game shorter. 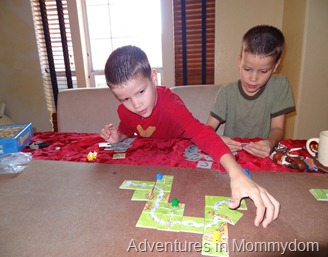 4.  Help each other plan and place your tiles.  It’s still competitive and there’s still only one winner, but this way less experienced players get help.

Sharing over at Learning All The Time and Mama Smiles.