I’ve gotten several not so subtle comments about a lack of seeing Halloween pictures, “Where’s my grandbabies?  Why haven’t you put any pictures up?”  So on and so forth………

So Mom, this post’s for you! 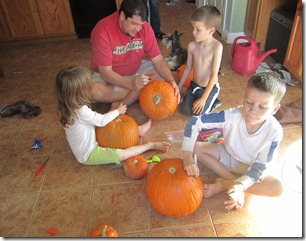 It’s amazing how kids change from year to year.  Last year the kids kind of willingly helped out, this year they were more willing to dig in, with the exception of Princess who was just not down wit this whole idea of getting her hands dirty…….

I tried the idea for the extra pumpkin we had of using the cookie cutter and a mallet.  I discovered: 1.  It needs a metal one to work at all and 2.  This plan destroyed my little cookie cutter, and I probably needed a better mallet.

Maybe I should have read the directions on the post instead of just looking at the picture on Pinterest……. 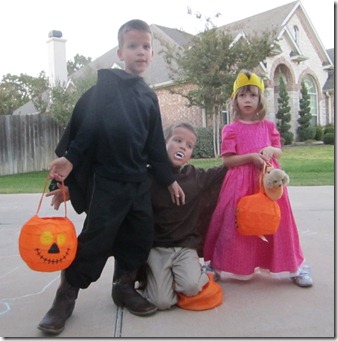 I made the bat wings using more or less the same plan as last year.  Sigh, it’s formatting all funny.  Fixed it by deleting the pictures and re-putting them in.

As per usual for my kids they of course changed their minds right up until the last minute, which is why I didn’t start making any costumes until last Friday……  And then spent an afternoon mumbling under my breath about tucks in little girl dresses and why don’t they cooperate? 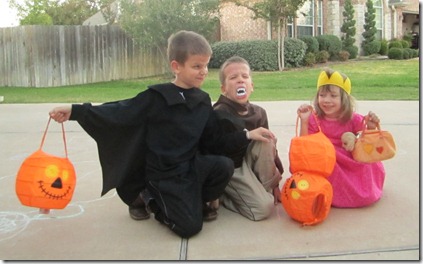 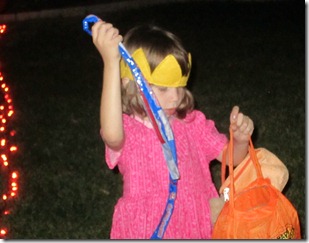 This year the kids were really into it, and so there are fewer shots of them in action.  But, they were happy to glom onto a group of neighbors and run excitedly from house to house.  Princess is the only ones in the pictures because she was the slowest moving of them all.

There were less houses with lights on this year in our little loop, so we actually expanded beyond it to the next few streets. 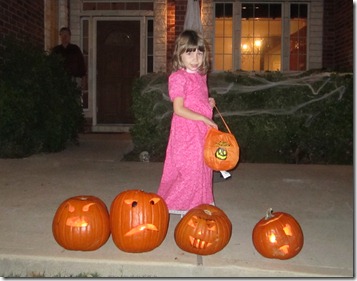 All in all they made a good haul, and I rather think our pumpkins have a lot of character, what do you think?