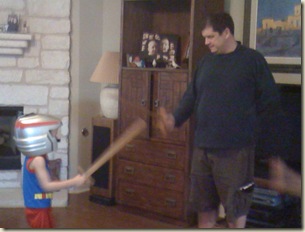 I’m sure knowing Jeff, he wants to be noticed, but not like this.  But, it’s my blog and I now have an excuse to brag on my husband.  Besides, I’ve written incredibly touching messages about the other boys in my family……..

I’m incredibly lucky to have a husband like Jeff.  He keeps me honest and my feet on the ground.  He stops me from running in and doing something silly when I shouldn’t and keeps me from trying to do everything at once.  Which I would.  I’ve tried.

He is so great with the kids.  It’s fun to sit back and watch them playing.  We had an agreement back when we got married he can wrestle and rile them up as much as he wants to right before bed, as long as he puts them down.  He’s stuck to that. 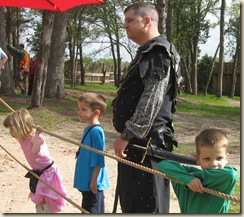 And you know what one of the coolest things about him is?

He doesn’t like sports.  But, he will watch things with me he doesn’t really like.  And we have the same interests for the most part, we read the same books and watch the same movies.

Seriously girls, it’s like God designed the perfect man for me.  There’s not many guys who’s book collection could rival or outnumber mine.  But his does.

Okay, that’s it.  I’m going to help him with folding laundry before we go pick up the kids.  They’re going to meet the puppy later today (or at least later today when I’m writing this).