Haven’t you ever wondered that?  I mean it’s on a different continent after all, and there’s an ocean between us and them.  It’s a big ocean.

So, I posed the question to my kids: How did the United States end up in World War 1?

First we had to address the Luisitania.  The Luisitania is the sister ship to the Titanic, and it was quite the luxury liner.

The only problem?  It was smuggling munitions for Britain while carrying those expensive passengers, and everyone knew it.  Germany even printed an ad in all of the New York newspapers warning they were going to sink the ship.  Did people listen?  NOOOO, only one person canceled their tickets.

And the Germans did what they said, they sank the ship.   The American press and media were outraged, “how dare they sink the ship!”

We watched this video together and the kids were outraged and shocked watching the sinking of the ship.  I was surprised how much they were upset by it.  Princess was almost crying.

So like any good American we wrote a strongly worded letter of protest!  Oh the outrage!

Can I just say I WANT that dry erase board?

Straight journalism is just the facts, with no attempt to input the writer’s opinion.  Honestly this is almost impossible to do because we all have our opinions and we all want to influence opinion somewhat.  Sadly I didn’t get a good video of this one.

Editorial.  You are blatantly stating your opinion, you are naming names and giving reasons.  I did not get a video of this one because Superman outright accused someone else of stealing, he named names.  Just like you would in a good editorial.

Propaganda.  You are trying to influence what people think, but you’re not letting people know that.  Honestly most news today falls into this category on both sides.  Democrat, Republican, Conservative, and Liberal, all of them when the reporter writes their story or talks into their microphone you can hear it in their voices and in the words they use.

Propaganda replies on connotative meaning of words.  If you looked up the dictionary definition it would be black and white, but if you think about the shades of meaning in how we actually use the word there’s more to it.  It relies on descriptive words to give the emotion.

Now if the Lusitania had been the only factor we probably would have stayed out of the war, but then there was the Zimmerman telegram………. 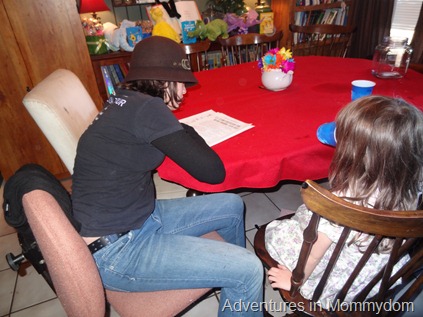 Germany sent a coded telegram to Mexico proposing an alliance and Mexico could take the United States……  Britain intercepted the telegram, decoded it, and that was the end of it.  We got into the war.

Other posts in this series or  sites you might find useful:

What was it like in the trenches of World War 1?

I’m gonna share at both of these great history linkies, thanks ladies for hosting every week!