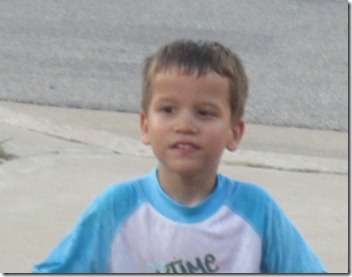 Last night at the Backyard Bible Club in my neighborhood Superman prayed to Jesus and asked Him to come into his heart.  As you can imagine Jeff and I are very excited about this.

It was an interesting conflux of events.  He’d asked the teens some questions earlier in the week, but hadn’t been ready to pray then, saying “He wanted to think about it.”

Last night she followed up with him asking him what he was thinking and if he wanted to pray with her.  He did, and so they did.

I feel fairly safe in saying this is a genuine conversion from both his ability to explain it, and his willingness to tell other people about it.  He told her, my Mom, a couple of other people, and then his grandparents on the phone.  I could still be wrong and it could be an example of him knowing the right answers, but it doesn’t feel that way.

He’s been carrying the Bible he got from them around ever since.

The bad part came when his brother and sister saw he got a Bible and they didn’t.  Oh the tears, the tears.  It was only alleviated by our giving them Bibles…….  Which luckily we have a few dozen on hand.