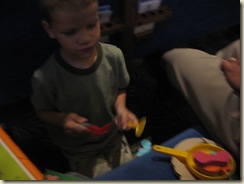 My college roommate, Danette, is a Seventh Day Adventist.  Which, according to my interpretation, which is of course completely wrong I’m sure, means she goes to church on Saturday, and they follow some of the Jewish rules.  Oh, and she’s essentially a vegetarian. 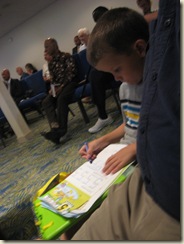 One thing I learned is they don’t have a children’s church or Sunday School during worship, so these two pictures are of my kids playing with the bags during worship.  Instead they have a story time for the kids before the sermon.  It kind of amused me because they have a “kid’s offering” where the kids run around and collect as many dollar bills from people as they can before coming up and putting them in the offering.  It was fun to watch the kids walk quickly from person to person holding up their dollar bills. 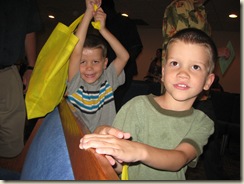 Here’s the boys getting ready to take their bags back out (service is over, so I felt free to use a flash).  The sermon was interesting because we came the week after the once every 5 years conference, and so the pastor was reporting on the results of that conference. 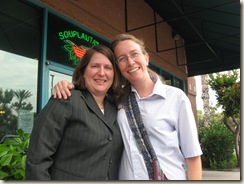 This of course, led to Jeff and I asking all sorts of questions about what the different points he brought up meant.  For instance they were talking about ordaining deaconesses, and we wanted to know what that meant.  Our church has Elders, and they lead the church, think of like a board of directors that are elected every 2 years.  A deacon or deaconess at her church is essentially a volunteer who is being recognized for their contributions to the church.  So, it’s not ordination, as in a pastor is ordained in the Catholic church, but instead a recognition ceremony (my rephrasing of her words).   So, it was a great way to end our visit with her, because I’ve been curious about her church since college, and this was my first real chance to visit one.  Aside from that one revival I went to with her in college, where they told us going to church on Sunday was the Mark of the Beast, and poor Danette was trying to crawl under the chair in embarrassment (remember that girl?).