I started a mini-review back when we first got it, and I was sick as a dog then, so I couldn’t play.

Now, I’ve had a chance to play it.  The kids still love it and have added it into the cycle of games they request. 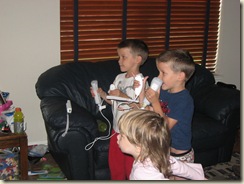 My boys favorite games on this is still the races.  They alternate between requesting the bike races and the flying ones.  I personally think the skiing is fun.

What kind of workout is this?

Mainly upper body.  It’s designed so most of the games can be used without the balance board.  And don’t be fooled it will give you a decent workout for a run of the mill workout (I’m not talking athlete in training for competition).  But, my arms and shoulders were quite sore after playing the different games for about 20 or 30 minutes. 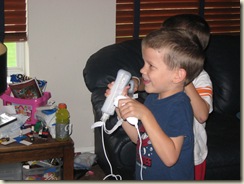 I like the look of it, the animation style is fun and kind of cartoony.  The backgrounds you can choose from are fun.  I thought it was rather fun to be underwater in Atlantis, and the kids love the fact that some of the backgrounds are straight from their Jump Start game on computer.

I love the variety of games, and the fact that when I play volleyball on this I won’t get hit in the face like in real volleyball.

What did I dislike?

This is a general problem I have with some Wii games, so not specific to this game.  Sometimes the controller is not fine tuned enough, and the twitch reflexes are a little too fine, so it’s hard to point to the game to start it.

I wish there were a smoother way of switching between people (and this also is a problem with Wii games in general).

So, overall, I have to give this game a big thumbs up.

This is in stores now and is available for $29.99
It is rated E for Comic Mischief