Admit it, this is one of those King’s of Israel we don’t really know all that much about.  I guess being the 4th king we don’t really care, just like no one really knows who the 4th president of the United States is except for Jeopardy winners and a few history buffs.  But, there’s a lot to learn from King Rehoboam, so my Sunday School class got to learn all about the 4th and final king of united Israel.

Rehoboam is obviously king after his dad Solomon, and saw all of Solomon’s decisions good and bad.

At the very beginning of Rehoboam’s reign, all of Israel came to him and said “Our burden was heavy under your father, please lighten it.”

King Rehoboam went to his father’s advisors and they said, “They’re right, your Dad drove them hard, lighten the load.”

Then he went to his friends, who I always picture as frat boys potentially drunk, “Dude, if they think your father made their lives hard, wait till you get a hold of them.”

**I’m sure they said, Dude, it’s right there in the original Hebrew.**

And so King Rehoboam did what any young man would do, he followed the advice he liked, and as a result half of Israel rebelled.

So, this was part of the area we focused on.

Fixing King Rehoboam’s problem: how to not take advice

We talked through the discussion questions, and while we could talk about the new king up in Northern Israel and his problems, right now that’s not what my kids were going to struggle with.  They need to know how to ignore advice from a friend.  Because 9 year old boys come up with spectacularly stupid ideas, and 7 year old girls can be hopelessly mean at times.

We brainstormed for a while, how to ignore advice and still remain friends, and here’s the results from the kids:

What advice would you add in?

King Rehoboam did one thing right.  He fortified Judah’s walls after the Civil War.

Because this is wildly popular to do with my kids, we built a Lego city, and rebuilt the walls.  The boys were especially happy when I said they could use anachronistic figures in their city.

They built away, and while they built, I cleaned, and cleaned the disaster zone that is my upstairs.  I think any burglar coming into my house would die as they tripped over things.  Forget an alarm system, my floor will do it all by itself. 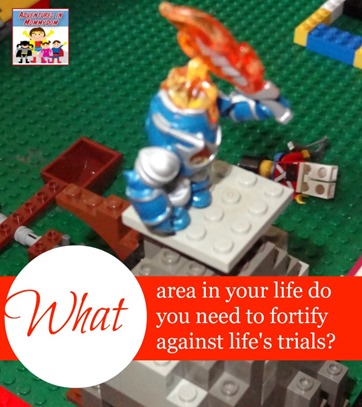 After they built we talked about how those walls represent something else.  They represent protection from temptations and from problems that might come.  How can we rebuild our walls?

Other Resources for King Rehoboam

Buck Denver Asks: What’s in the Bible? Volume Five – Israel Gets a King

Okay, aaaaaaannnnnnd that’s it.  There’s not a whole lot on him, almost nothing.  Zero, Zilch.

As always you can get the PDF by clicking on the picture up above or on: King Rehoboam’s Folly.

See what happens to the Northern kingdom in Kings of Northern Israel.