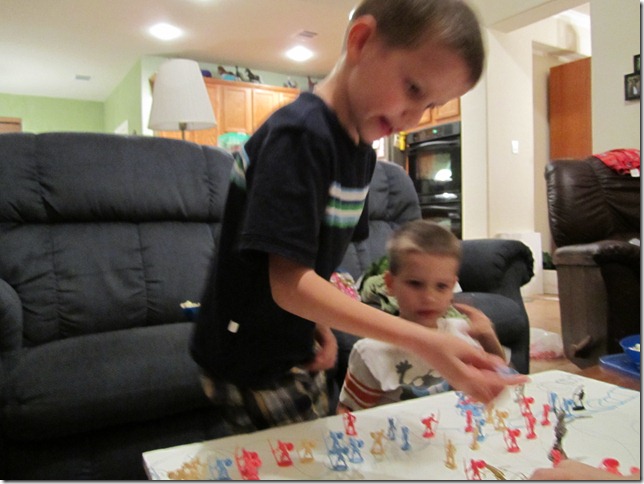 This needs a BIG picture! 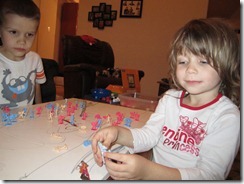 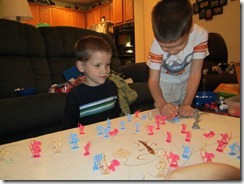 The skeletons were going to be the bad guys, and of course we needed good guys for us to be.  He searched throughout the store and found the pewter figures, at first he tried to convince me we needed to get the Heroclix Iron Man figures……  But, eventually he ended up with getting two archers (one for Batman, and one for Superman), and a unicorn for Princess.  I convinced him that Jeff and I already had figures (which we do, Princess gave him a dragon for Christmas, and Sam had given Jeff and I hand-painted figures the year before he and Tara got married). 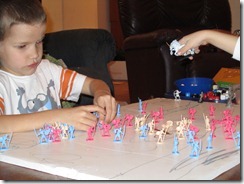 We got home and we disappeared into my room and wrote up the rules.  He created cards for each type of figure listing their movement, what their powers are, how much damage they do.  He explained what the goal of the game is, and how it is played.  Each of our figures has a special ability.  Princess’ unicorn can shoot form its horn and do a lot of damage. 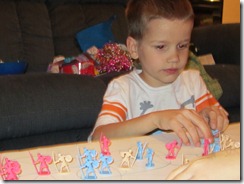 Then he absconded with one of my pieces of foam core board I’ve had earmarked to make a puppet stage.  Now, I’ll have to wait for the next round of sales on those.  He drew a game board, and quite happily came back in and explained to me what all of the different pieces meant and then we wrapped it up. 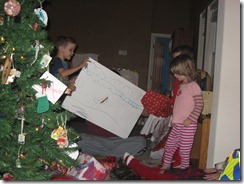 Game play, actually had very little to do with the rules he created.  Instead, it was more of declarations, “I shoot this bad guy,” and then the bad guy would be dead, and lots of rules added in.  But, it’s been fun to play with them, and has given Jeff and I many laughs as we’ve seen the different rules they’ve come up with as we play.

Isn’t that a cool board to make up?