Ages ago one of my first posts was about making monsters.  Well, that interest is still going strong 3 years later.
This time they did pretty much all of the work. 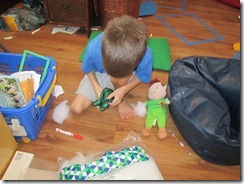 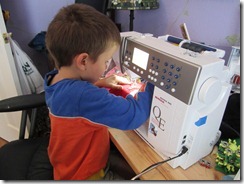 Cutting, stuffing, sewing, and all of that.  All we have left is to sew the final seam shut.  I had intended to have them hand sew it, but they REALLY want to use the machine.  I mean really really.

And that particular interest has lasted almost since I first got the machine when they were 2 years old.  See the blue tape on my machine?  That’s because at 2 they figured out you can stuff pins in there.  When I took my machine in for its first tune-up they found 20 something pins in there.

YEAH……….  I think it took them less than 2 minutes.  Then they did the patented scatter and run technique.