So, my kids have been struggling with their counting and knowing what the numbers looked like.  To help with that I’m creating a game.  Actually they did some of the hard work. 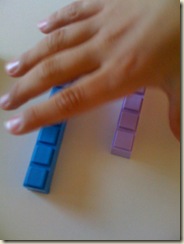 They took turns putting out the numbers from 1-20 and I took pictures with my super fancy camera phone.  Then I copied these pictures into a table in word and now I’m going to label them with numbers and words and print two copies.  One I’ll cut apart and the other will be the master.

So, I’m mainly sharing this so you can see what it looks like.  I don’t think it’s the best work because the pictures aren’t great.  But this gives you an idea for making it yourself.

I’m all set to cut this out tonight (in theory).  I’ll let you know how they like it.

Now, head on over to Joyful Learner to see some other cool math ideas.