In case you couldn’t tell from my post over at ABC and 123 we’re working on this A LOT.  Well, here’s one of our other activities we’ve been doing.

Supplies needed: one of the printables linked below, or your own hundred chart you’ve cut up, there’s a lot available

And for those who can’t tell by the pictures, the order is: hundreds chart, 2s, 5s, and then 10s. 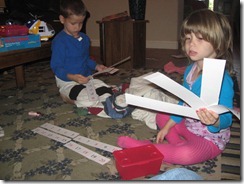 I cut it out into strips for each row, and then passed them out in a circle to the kids.

Then we played it much like many other games of putting down the cards in order, and your goal was to be the first one out.  Of course we played until everyone won, and everyone was out of cards, so being first wasn’t the amazing deal you would think it could be. 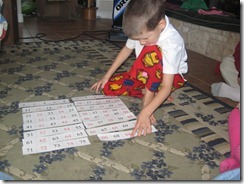 After all of these games and practice this December, they’re starting to get the hang of it.

The test will be how they’re doing with it after a few weeks of not playing these games.  But, I have plans to keep this in our review cycle……..  Yes, great plans.

Now head on over to Joyful Learner to see what other people have been doing to work on math.