I’m kind of trying to sort through memories and pictures right now of my friend.  And so, you guys are going to be lucky enough to hear about him this way. 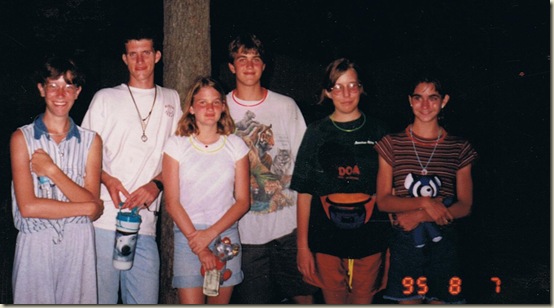 His real name is Aaron.  Aaron Scott.  He’s the fourth one on the left, and I’m the one on the far left.  Yes, I sun burn easily.  We met on a trip to Six Flags that our youth group had organized (I am rather amazed I found this photo from that day).  It was slightly awkward because a friend of mine had decided that we would make the perfect couple and so she spent the whole trip trying to fix us up.  You know, arranging for the two of us to sit next to each other on a roller coaster, or other strange things.
We discovered we had a lot in common, and then we met another friend, also named Aaron.  You can see the problem that was going to arise.  Well, those two delighted in having the same name and in stealing things from me and putting it on high shelves I could never reach. 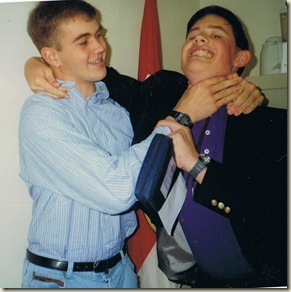 Sam is on the left and his best friend Aaron is on the right.  I have no clue why he’s strangling him. 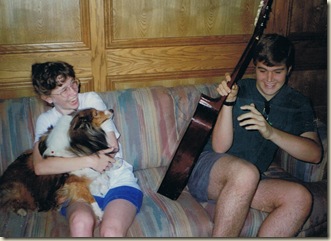 He loved to torment my dog.
That next summer we went on a mission trip together.  There were FIVE people named Aaron or Erin.  I forget the reason, but for some reason he decided to rename himself Sam, and from that point on I’ve called him Sam. 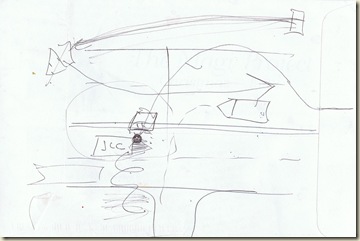 You know.  I don’t actually have a picture for this story.  But, I have this diagram that his Dad drew.
When I was a junior in college I was all set to go to Sam’s birthday dinner.  I was waiting for my Mom to come home so she could drive me there because my car was in the shop.  I’m starting to get impatient because we’re going to be late if she doesn’t get there soon.  That’s when I got the call.  My Mom had been in a car accident and was in the ICU, and could I get down there soon.  I called Sam to let him know that I couldn’t make it to his party, and I needed to find a ride to the hospital.  Well, he calls me back a few minutes later and tells me he, and his family are on their way over to take my brother and I over to the hospital.  Then they spent the majority of that night until about 4 in the morning at the hospital with me as we waited for word on how my Mom was doing. 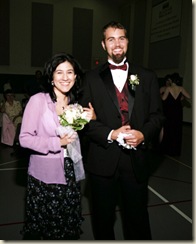 He was in my wedding as an usher.  One of my most precious memories from that day is when he and Aaron R stood outside the sanctuary and saluted me as I walked through those doors.  He also caught the garter.  It’s the only wedding where I’ve seen guys fight over catching the garter. 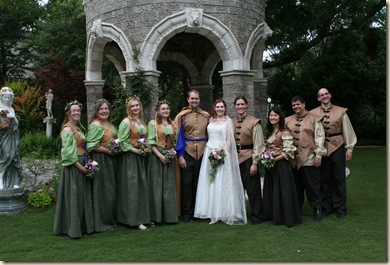 Sadly, my computer crashed and I’m not able to find the great pictures of him teasing my boys.  But, I do have a fun picture from his wedding.  The whole family was in the wedding.  I was a bridesmaid, Jeff was a groomsman, the boys were ring bearers, and Princess was a flower girl. 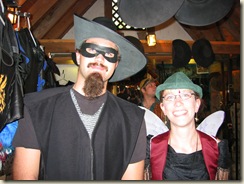 Every year we would go to the Renaissance Festival together, and then in the spring go to Scarborough Faire.   Here’s where I talked him into getting the mask to go with his swashbuckler hat.  You can’t see it, but on the back of my hat is this long narrow feather that he had so much fun sitting and thwacking up and down. 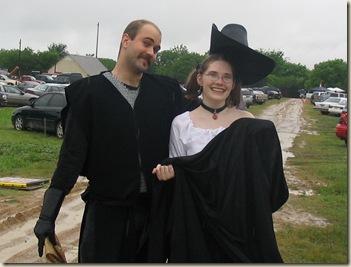 And I was so incredibly happy when he and my best friend in the world got together.  Isn’t this a great photo of them?
Well, I’ve got another post on God’s goodness in this time I’ll try to get written later.  We’ll see.