Yesterday, Kristi over at Orange Juice wrote yesterday about Mortifying Mommy Moments, and asked about ours.  Well, I have two doozies of a story but they’d be way too long to put in a comment.

This first one happened back when Princess was just a baby, and the boys were almost two. 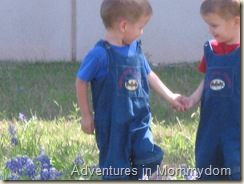 Now, my boys LOVE popcorn.  It’s one of the first words they learned how to say, more or less, along with such other important words like ball and dog.  Mom was way far down on their list to learn.  A fact I will never let them live down.

We were visiting my in-laws up in Dallas and walking through the downtown looking at stuff, and the boys saw and smelled their favorite food, and started yelling at the top of their lungs:

We walked across the street to the store and got in there, and it was packed.  It was one of those special “Go visit scenic downtown” days, so the downtown was packed and who wouldn’t want to go in an old-fashioned popcorn parlor. 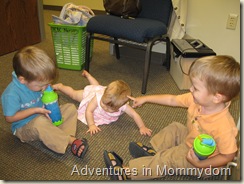 or Why Not to Go Clothes Shopping with Your Little Kids. 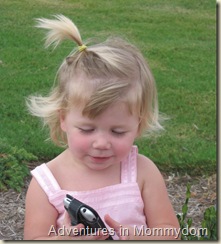 So, at this point in time Princess is walking, the boys are way too big to be corralled in a cart effectively, and I desperately needed clothing of some type or other.  I think it was workout clothing.  Being, the self-sufficient Mom that I am I load up the three kids, and we head off to Target to try on some clothes.  I get there after much searching find something I’d be willing to wear to workout in that doesn’t make me look horrible (I’ve decided that looking all horrible and clothes that are huge are a big demotivator for me, there’s nothing like seeing myself in a big wall sized mirror with my face all red and blotchy and wearing something that makes me look overweight, which I’m  not).

I head to try on the clothes, and think “I should go in this great big huge handicapped stall so I can fit all of us in there and the cart, which will keep Princess nicely contained.”  Great idea right?  Well, the stall didn’t have the best of latches. 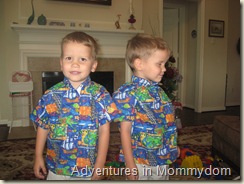 I momentarily distracted the boys with some piece of paper or something got started changing.  While I was in the process of putting on the horrible sports bra or some such; they opened the door and started to run out.  Now, what could I do?  I wasn’t about to run out into Target with no clothing on.  So, I’m stuck calling after them while frantically trying to put clothes on.

So, after throwing some clothes on, I ran out the door, gathered them up again, and then put them in the cart, much to their chagrin.

And never again did I go clothes shopping with all 3 kids.