Well, there weren’t many suggestions on where to get some quick phonics games, aside from a suggestion of getting Happy Phonics, which I’ve heard is awesome, but I don’t want to buy another curriculum.  I was really looking more for a couple of quick games that were online somewhere that I could print.

And, so I made up our game in a few minutes.  I’m probably going to make a second game for the rest of the short A words they use rather than having my kids do the worksheets, but I’m not going to share that since I’m just going to copy their pictures, and that would be violating copyright… 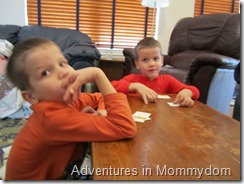 Then I finished cutting it apart, and only passed out about half of the cards.

This kept the game at about a 5 minute length, which meant we got to play several rounds during their attention span, rather than just one or two………
This particular time we did it as a Go Fish variation, but it could easily be used for memory, or any of the other little kid card games.