As we started our Napoleonic wars history lesson, I jokingly said, “It’s all his fault we got World War 2.” Then the kids looked at me like I was slightly crazy, and I thought, “Challenge accepted!” Then proceeded to gather up some legos, a map, and some vis a vis for our history lesson, turning it into a lego history lesson! YAY for LEGOS!

(there are affiliate links in here)

Supplies and set up for Napoleonic wars history lesson

LEGOS! (I had the kids grab me a pile of minifigs from their stash), wall map (make your own and laminate it), vis a vis markers, history book

Then take your map and redraw it to look roughly like it’s going to look when Napoleon is going through all his crazy redrawing of Europe.

Let’s get started on Napoleonic Wars

Napoleon was an amazing soldier, and distinguished himself with basically conquering large portions of Italy. They attempted to get him to take on the invasion of Britain because

The French Revolution folks, it’s all about contradictions.

Well, while he was in Egypt, the Directory was super falling apart, and he took advantage of that by abandoning his troops and swooping in and saving the Directory by getting himself put in charge.

Now he got started on his plans to take over the world!

Napoleon starts putting his family on the throne

Then slowly but surely, Napoleon marched across Europe rearranging it to fit his liking.

He dismantled the Holy Roman Empire, and rearranged it to create the Confederation of the Rhine.

He walked into Spain, and toppled the remains of the Bourbon dynasty there, his excuse, we don’t want a return of the Bourbons here in France, and Spain might help them come back.

He pulled his brother Joseph from Italy and installed him as the king of Spain. This helped kickstart the Mexican Revolution.

Then he swung over to Austria and set up another government there, after all Austria had started wars 50 plus years ago that France got dragged into willingly, and that could be a problem for his government. He carved up that country and put his brother Jerome in charge of the brand new country of Westphalia.

Napoleon has achieved his aims now, and is in charge of most of Europe, so he turns to economic power and sets up the Continental System to try and cripple Great Britain, who he really doesn’t like for constantly messing up his plans.

How did I forget Russia? Napoleon invaded Russia in 1812

Thanks to Natalie, whose blog is now private, for pointing out I forgot Russia. My kids would never let me live this down if they hear.

NO ONE TELL MY KIDS I FORGOT TO SAY THIS PART.

Russia was originally part of Napoleon’s Continental System, but they withdrew at the point it was no longer advantageous for Russia, and so they withdrew.

Well, Napoleon couldn’t have that, it would mess with his, “I’m the great organizer and ruler of Europe vibe,” so he gathered up his army and headed off to Russia.

However, Russia had no intention of fighting Napoleon in a straight up fight that favored him, so they kept withdrawing their forces further and further into Russia.

This shortened their supply lines and gave them more advantages in a fight, and at the same time lengthened Napoleon’s supply lines so they have to get food from all the way across Europe in a time before railroads or any form of quick means of travel.

Then Russia’s winter hit, and Napoleon was not prepared to deal with it. He started this campaign with an army of 600,000 and ended with only a few thousand as he limped back to France.

This is the part in the Napoleonic wars history lesson where everything starts to go wrong. Here’s the problem, while Napoleon may be a genius and quite capable of running everything, his family is not.

Do you like the Gingerbread Man kicking out Batman? We of course had to have Batman in there.

From there, everyone else was really tired of Napoleon taking over everything, and they formed the Third Coalition to kick Napoleon out of France.

Slowly but surely they whittled down Napoleon’s support until he was finally removed from power in 1814. The Coalition recognized Napoleon would be too powerful to leave him in France, so they exiled him to Elba.

Napoleon sat in exile for a few months, give or take, and finally was able to get off the island and returned to France for…

Which is going to be another post someday because this gets into all sorts of fun.

Why do I care about Napoleon conquering Europe?

Prior to the Napoleonic Wars both Italy and Germany were not countries. Germany was the Holy Roman Empire, a loose confederation of independent city-states that pretty much spent their time trying to make sure their city-state was in charge.

After Napoleon came in and redrew all of Europe, there was talk of a united Germany. A greater Germany.

Now, it took another 50 plus years for that to happen, and we get to have the whole Metternich and all of that crazy, but it does happen, at which point Germany looks around and says, “Hey, we’re behind on this whole empire thing! We need to catch up, and BOOM!

The same thing happened in Italy. Prior to Napoleon, all of Italy was a bunch of city-states. They were all great rivals and were quite happy to poke each other and start wars with each other.

His wars set off revolutions in Haiti, Mexico, South America, and a few other places.

Though, to be fair you could kick that can a bit further back and blame those revolutions on the American Revolution.

All right, that’s it for me today. 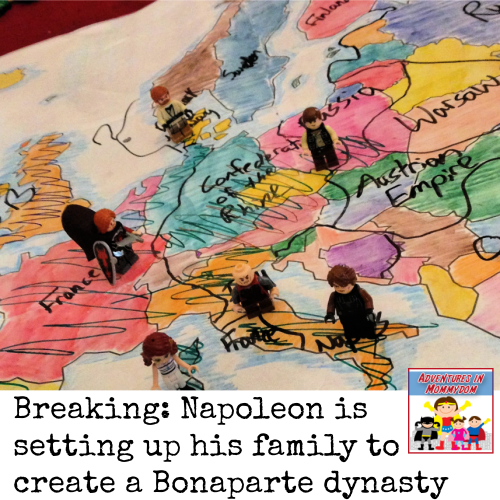