As you can see there’s not a lot in the book itself, but there is some stuff (including the Valley Forge page, which I’ve since learned should be in Pennsylvania……).

Future Ticia 2022 says: There is no Geography Now type of source for United States geography, and my questions to various people trying to find good video sources came up with very little, so here are the three videos I didn’t absolutely hate:

My kids made fun of the video, it’s robotic voice and how it made them fall asleep.

This was the video I wanted to show them, but wasn’t able to find it when we were actually watching videos.

I didn’t show the kids this one because it’s clearly aimed at elementary kids, and my too cool for school (not really) kids would have spent most of their time making fun of the video. But, if you have elementary kids, it’s a great video.

And my usual state symbol page.  The kids were amused at some of the symbols, but mostly they liked the dinosaur.

I need to start a graph of how many different states have bee as their state insect. 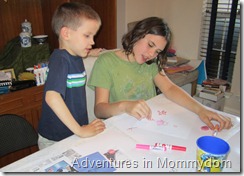 Thomas Edison– you have to click on the link to get the full idea, but his lab was here, and he made a LOT of inventions.

The paper with his name on it has a picture of three of his inventions.

Other activities not pictured, or that we didn’t get done:

Dinosaur dig– in honor of the first dinosaur nearly complete dinosaur that was found in New Jersey.

My kids still try to get out their bags of pieces from time to time…….

Blueberries– Wildly popular book series (okay in my house, it’s out of print in reality) about two Polar Bears trying to steal blueberry muffins.  One of the things New Jersey is known for.

Diners- New Jersey has the most diners per capita of any other state I found some cute books, one of which called Minnie’s Diner, totally recommend that one, and it was going to be a great math multiplication activity.  It just never happened.  Seriously, I had to recheck that book about 2 times.

I’m going to share this at some of my favorite blogs: Homeschool Creations, Children Grow, Children Explore, Children Learn, and Mouse Grows, Mouse Learns.   And coming in a few hours, Georgia.