We read this super cute book about Norman Rockwell, which is apparently part of a series.  At the time I wrote this I forgot to put the link in originally.  But I highly recommend it.  It tells a fair amount about his life and a little bit about how he drew and what his goals and aspirations were. 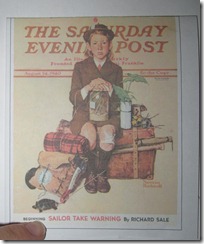 Here’s Princess’ story to go with this picture:  She is waiting for her mom and dad to come.. Pretty good handwriting for a 4 year old (she copied after I wrote it out for her).

I love the idea of taking a picture or illustration and writing a story around it.  Debbie over at Children Grow, Children Explore, Children Learn had been doing this with Selena for a while, and I kept meaning to do this, and now I have.  Hopefully I’ll do it again soon.