Remember last week when I said I was going to go back and buy a second set of the flash cards?  Well, I did, and here’s what I did.

Supplies needed: two sets of the same flash card game; scissors or a large punch (mine is 1 3/8”), plastic bag or pencil pouch to put completed game in

Punch out squares from your second set of cards.  Since my kids are slightly older I tried to make the placement a little harder.  This meant I was able to get about 5-6 squares per card.

Side note: I also made an easy version where I punched out one piece from each card and then left the card in there to find the missing piece. 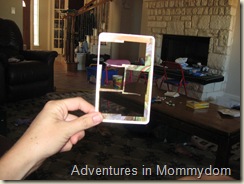 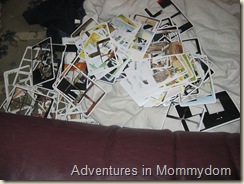 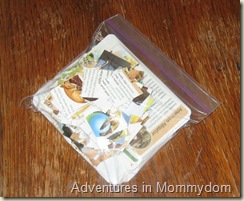 Completed game in a bag, it barely fits in a sandwich bag if you’re stubborn. 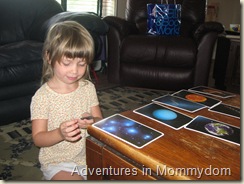 Rules for play (as we did it):  Pass out six cards to each person (I picked this as a handy number that means you’re likely to get matches often).  Obviously, this is the second uncut set of cards.

Pass the bag of squares around.  When it comes to you take a square out and see if it matches any of your cards.  If it does you keep it, if not it goes into the middle discard pile.

Each person also got a card with a hole punched in it; they are trying to find the missing piece for that card.

It was a lot of fun to play, and the kids had a blast being able to make an actual game out of their beloved flashcards (at first they weren’t convinced about my cutting up the second set, but now they’re okay with it).

For more great preschool ideas head over to Jolanthe at Homeschool Creations.