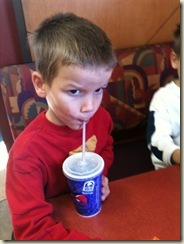 So………  Batman had been going to be Iron Man.

This is the best picture I have of his Iron Man costume, unless you want one in shadows.  He loves it.  And then after watching the stupid, I mean lovely Diego Halloween episode he wanted to be a bat.  And Princess wanted to be a bird.  Both of which necessitated making new costumes.

So, here’s the quick and dirty how to, mostly taken on my phone because yet again I’ve put my camera somewhere “special.”  I wish my camera had a homing device on it I could activate like my phone does.  I’d lose it a lot less. 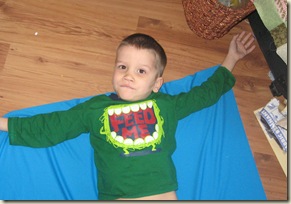 1.  Have your child lay down on the fabric with one layer of it open.  Mark where their wrists hit it, and about where you want the wings to end.
(and for those who are wondering this picture is actually from the Blue Arrow costume). 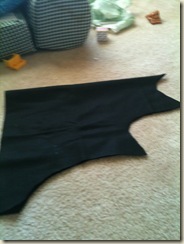 2.  Now fold you fabric in half, and using your “measurements” cut out a bat shape.

My scissors are ridiculously dull, and I should buy new ones because I’m atrocious to scissors, so I cut one layer at a time. 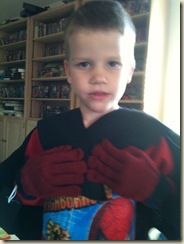 3.  Cut 2 strips of 1/4” elastic the length of your child’s wrists and sew that onto the ends of each arm.

4.  Then use some of the scraps you cut off to make the collar.  I laid it over Batman and had him model it to find the right fit.  (Luckily he was wearing the fleece pajamas he found in my winter clothes box, so all fabric stuck to each other). 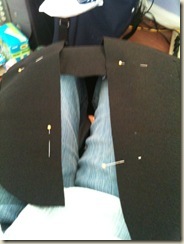 5.  Pin your “straps” to the back.  Also pin where you’re going to sew on the velcro.

Note to self: stop buying the sticky back velcro, it doesn’t stick very well, and it gums up my needle. 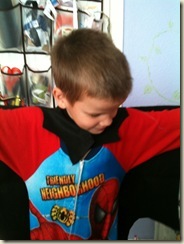 6.  Trim the straps to look like bat wings as well.  Try to get your very wiggly child to stay still for this. 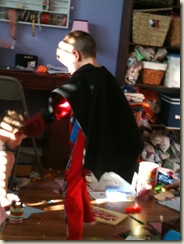 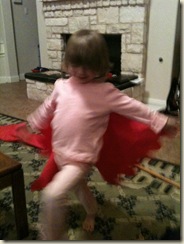 Try very hard to get your kids to stand still to take pictures.  In case you’re wondering they don’t really cooperate.

For Princess’ bird costume, I used the same approach, but cut it to look like feathers, and still need to make her collar/straps. 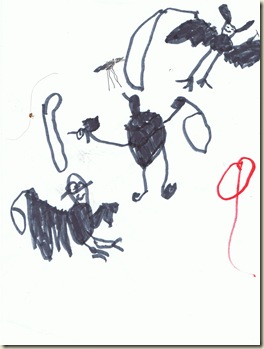 Oh, and this is Batman’s illustration of what his costume is supposed to look like.

I just had to include my “instructions” he gave me.  I think one of those is supposed to be the bat toy I’m making as well.