Part of why I’ve been so crazy busy, apart from the usual craziness is I’ve had a few deadlines, but there were these little guys who felt I needed to do other things.  Like for instance: 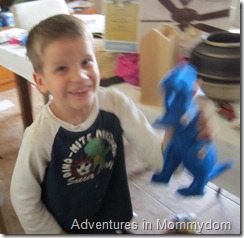 I’ve been making Buddy from Dinosaur Train.  Okay, so Buddy isn’t blue, but Superman likes blue and he likes Buddy.  So, this is Buddy.

They’ve been mostly inseparable since I finished him last week. 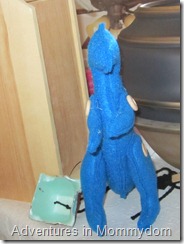 You can’t see, but his eyes are french knots using 6 strands, and the whole thing (other than the buttons holding the arms on) was done on the machine because I’m lazy and it’s faster.

Besides do you have any idea how hard it is to get any serious sewing done when a six year old is showing up every 2 minutes demanding how far you’ve gotten on his Buddy?

Pattern is found here.  I love this pattern.  It’s like an hour project or less probably. This is one of our new favorites in the house.  Do you know about these cheater panels?  If not let me enlighten you.

The top is pre-shirred, and the bottom is pre-hemmed.  Just have it cut to your darling daughter’s measurements plus an inch, sew one seam, and you’re done.  Or, you could be like me and add some shoulder straps because I just know what would happen if my four year old wore a strapless dress.

Goodbye dress.  Seriously, that girl has problems with her clothes. 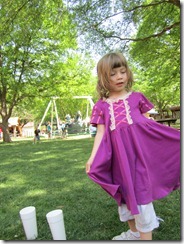 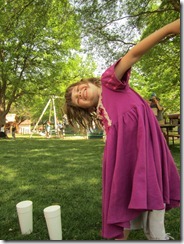 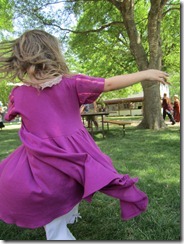 And, here’s Princess in her new Rapunzel dress!  I’m thinking about adding in elastic on the bottom of the sleeves.  It fits great, except since I didn’t use stretch lace I had to cut the neckline hem in a couple of places to get it over her head.  Oops.

And sadly there’s no picture of me in my new outfit I sewed, before I got a picture I bought a pretty new dress that Jeff loves.  I’ll be getting those pictures up soon from the Ren Fest in general.