So, I have very mixed feelings on this product.  On the one hand, I do have to agree my kids are really enjoying it, and they seem to be catching on better (we haven’t hit the part where they hit a snag before yet).

But, on the other hand, I have to say their customer service is atrocious.

I ordered the K/1 combo kit, and it comes with a large number of workbooks, lots of games, a CD of the songs, and a treasure box.  It also came with a VCR tape of how to use this curriculum.  Yes, I did say VCR tape.  Really.  No, I’m not kidding.  VCR.

It has a teacher manual for the first grade materials, and a 2 page pamphlet for the kindergarten, and a VCR tape to explain how to teach this. 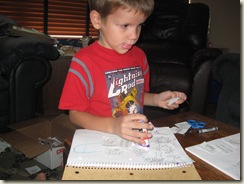 So, here’s where the problem set in.  I don’t have a VCR, ours broke 3 years ago, and we didn’t replace it.  I managed to borrow a VCR from my brother, and discovered the video is somewhat helpful, but not really.  It’s mainly going through step by step what it says in the 1st grade teacher manual.  Not too helpful, and very self congratulatory.

Also, it’s heavy on consumables.  They’re high quality, don’t get me wrong, but it’s a LOT of workbooks.  For each letter in the K program there are at least 6 or 7 pages.  I’m not sure how many you’re supposed to do a day because it never says, but I’ve simplified it down to 4.  Though, I’m guessing it’s one a day.  Maybe.

Now, as to their customer service.  When I discovered it was  VCR tape, and the scant K teacher manual they had said “watch the video,” I sent an email asking if there was a DVD available, and asking if there was more to the teacher manual somewhere.  It took over a week to get a response back, and it basically said, “No DVD, and look at the first grade manual.”  Not so helpful.

Now, here’s how I made it work for us, because heaven forbid I actually use something the way it was intended to be used. 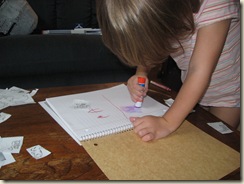 As I said, I scanned all of the pages for one letter and put them into a word document and then I’ve simplified it down so they all print onto 2 pages.

For the cut and paste part, I have them glue it into a spiral notebook, and write the letter for the day again.

I will say this, for all of my frustration with the way it’s set up so far.  They really like it.  I don’t get complaints about sitting down to work on it, and they enjoy the different ways they present it. 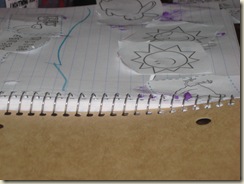 They love to play the games.  I’ve glance through the readers, and I think they’ll love those too.  They’re bright and colorful and not too many words per page. 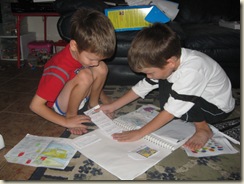 And, it seems to be working.  We’re not to the point of trying to read yet, but I see progress with all of them.  They’re handwriting is getting much better and it’s in amounts they can do at one time.

Would I buy it again?  Yes, though I probably would just get the 1st grade kit rather than the combo.  At which point I would buy multiple copies of the workbooks because those actually use all of the page.  Overall, mixed feelings on the whole thing.  UPDATE:  As we got further into the year the stories became too long for my kids and I had to quit using it.  There was too much frustration.

Disclosure: I bought  this, I was not given a copy to review, I’m just sharing my opinion for others to know what I think and help them make decisions.