Earlier this week Jeff told me he saw an armadillo as he was leaving for work wandering around our yard.  I was pretty excited, because armadillos are common to our area, but you rarely see them alive.

Armadillos have poor eyesight and their instinct when scared is to freeze and then jump up into the air very high to scare the predator.  That does not go well when the predator is a car, and they usually don’t survive……… 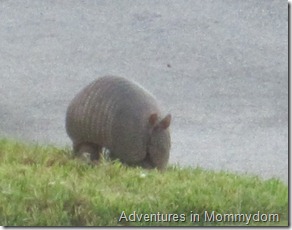 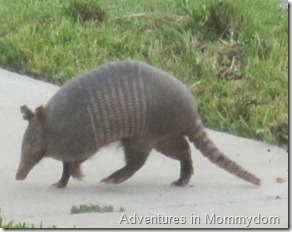 So, you can imagine I was pretty excited when I saw one outside the next morning.  I got all the kids outside and we watch him run around and reviewed what we knew of armadillos. 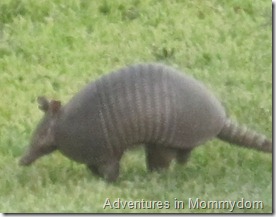 Armadillos are nocturnal, that means they usually come out at night.  They can’t see very well, but can smell very well.  The bad eyesight was reinforced when we heard him bump into several things in the bushes. 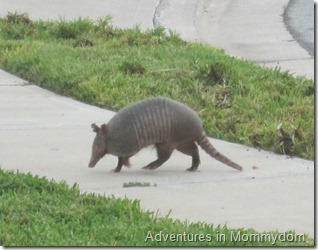 Armadillos like to dig A LOT.  We looked at the holes in the ground he had dug last night, which you can see behind him.  I asked the kids why they dig, what are they trying to get, and they answered “bugs,” and they were right.  Armadillos eat primarily grubs and insects in the ground.

When I asked how they dig, they said they have claws on their front feet like Mac (our dog) does.  He can dig tunnels like Mac tries to also. 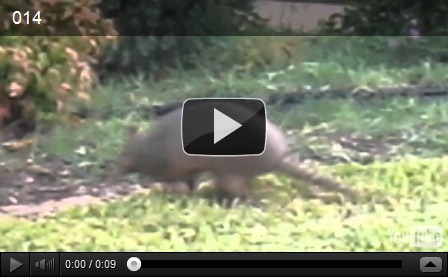 One thing that surprised me was how noisy he was on the sidewalk.  His claws are so long in front that they clicked rather loudly in the morning air. 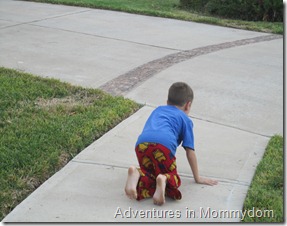 And of course Batman had to pretend to be an armadillo and move just like the armadillo did…….  It was great.