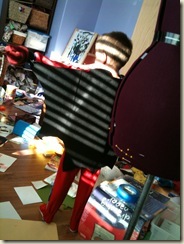 We finished up learning about bats by learning the difference between microbats and megabats.

Microbats are the smaller bats that eat insects, vampire bats are among these, and they eat blood from mammals, mostly cows and horses.

Megabats are fruit bats.  They don’t use echolocation, but instead use sight and smell.  After all fruit doesn’t move, so you’re not really needing a sensitive way of finding things.

We finished up our discussion of bats by watching the bats fly from the bridge in Round Rock.  It was amusing to me because the colony of bats in Austin is mentioned in our text book as an example of people not understanding God’s reason for creating certain animals.

See, back in the 60s and 70s they had a panic about bats carrying rabies, so they started killing the bats in Austin.  Then they noticed a dramatic upswing in insects, and realized there was a reason for bats.  One bat eats thousands of insects an hour.

So, now Austin has one of the largest colonies of bats in the United States all roosting under the Congress Street Bridge.  It’s very cool, and once my internet is working again I’ll put the you-tube video in.

Oh and the linky, that’s what happens when you write posts with a migraine.

Aren’t the bats cool, and if you want there’s a 2 minute and a 5 minute version.  It’s the coolest thing to see them streaming out of there.