Well, I was going to give you a link to the two Reading Rainbow DVDs we watched this week all about the sea life, but Amazon has no clue what I’m talking about, and youtube just gave me a bunch of strange links. 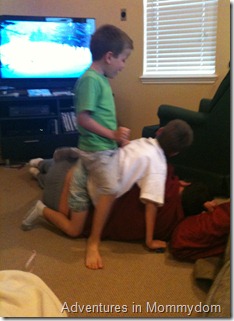 But, if your library happens to have these:  Seashore Surprises, and Dive to the Coral Reef; get them.

We watched these one day while Jeff was laying there in misery with his horrible sun burn, and then the kids, Mom, and I headed off to the beach giving Jeff some much needed “no kids trying to touch my sun burn time.”  If the kids had their way that’s how they’d watch TV…….. 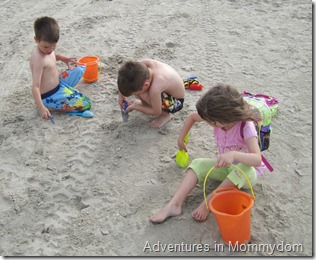 We wandered up and down the sea shore to find some of the things we saw in the video and of course to find SHELLS!

One thing we learned after watching the videos and reading our shell guide that the kelp that comes ashore is a good way to find sea shells. 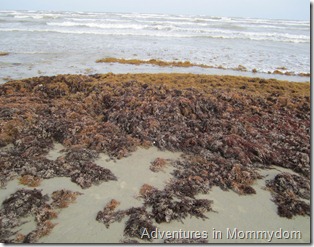 And as you can see there was a lot of kelp to look through.  A LOT.  As we were leaving we saw construction vehicles moving it out of the way.  Previously there had been no real kelp to speak of.  After a quick google search on my part I discovered we were in PRIME kelp season.  Which also seemed to coincide with when they’re at their busiest (May to August).

So, there was a lot of picking through kelp to find shells (which will become a whole series of Science Sunday posts as we do some experiments with them), and watching the surf to find the coquinas we had just learned about thanks to Reading Rainbow.

I wanted to capture a video of them, but figured someone already had at some point, and I was right, so this is a cool video to show your kids about life as a coquina shell. 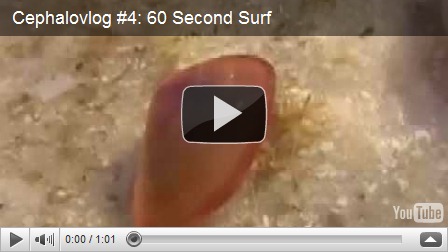