So, I’m sure you’re thinking.  What?  How do all of those go together?  Yes, they’re all animals, and yes they do all live in China, but beyond that?
Well, here’s what happened.
I borrowed a friend of mine’s skills to get some photos of the kids for a Father’s Day present that will hopefully be done by the time you’re reading this.  I’m having some problems with the website for the pictures, and it’s getting me all worried. 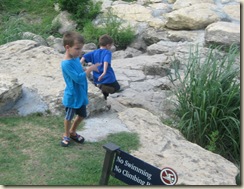 Well, very quickly in my very carefully constructed plan they got bored.  So, they went off rock climbing and going over the pond.  As they did, they noticed this: 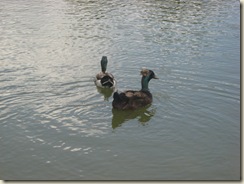 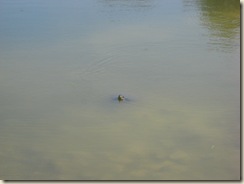 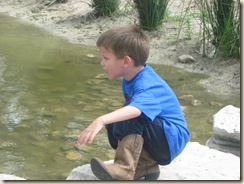 Ducks and turtles.  Well, being the inquisitive kids they are.  Of course we had to observe them.  First they counted and discovered there were a lot more turtles than last time we were there a few weeks ago.

Now, what to do with this?  Of course, let’s see what they’ll eat. 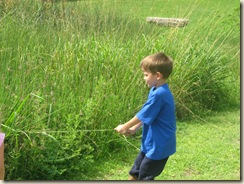 So, they ran over and started breaking off pieces of bamboo and throwing them in the water.  At first nothing was biting, so they tried other plants. 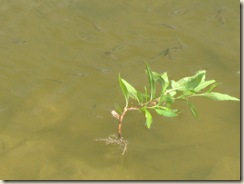 So, they threw in this plant.  The ducks and turtle had no interest in it.  However, these little polliwogs swarmed the plant.  Then we had a lot of speculation on whether or not these are tadpoles or fish.  We didn’t have enough evidence to make a conclusive decision.

Bother, got distracted by shiny photo products and seeing if another site had something that would work better.  FOCUS Ticia! 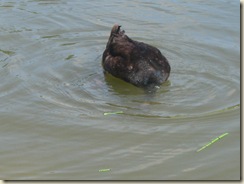 After a little bit, however we looked over and the ducks were devouring the bamboo they had thrown in the water.  So, the kids were all excited that ducks eat bread and bamboo.  This led to the question:  Are ducks like pandas?  Can pandas eat bread too?

And that led to a discussion about different animals and what they prefer to eat, and that ducks are not like pandas, pandas only eat bamboo.  That got me to thinking someday I should go to Enchanted Learning and print off all of their animal printouts because it usually has most of what my kids really want to learn.  Back when I taught first grade,  we used these pages for the kids to write reports on animals.

So, what’d you guys do this week?  Ours was fairly boring, but I had fun seeing the connections my kids were trying to draw.