Our science book, Flying Creatures, went into flying and migration this past week or so, and of course we had to look at the bones of a bird and compare it to a cow bone, because all young kids are comparing bones of dead animals…..

So, when I went grocery shopping I bought a t-bone steak and a whole chicken (though I suppose I could have just bought a chicken drumstick, achieves the same purpose).

Then we had a couple of very delicious meals, and I was a happy Ticia getting to eat steak, and confusing the heck out of Jeff when I told him not to throw away the bones.  But, he’s getting used to requests like this, and he just requested I get the experiment done soon. 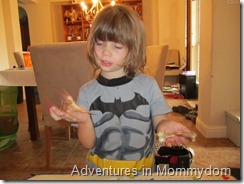 The kids happily examined the bones and looked at them.  They declared the chicken bone to be smoother, and the cow bone to be more rough.

I directed them to think about which felt heavier, and they noticed the cow bone did.

Ah ha!  They played right into my hands, so I got to remind them how our book said birds bones are hollow.  Okay, it says there is a web of interconnecting to keep them lighter, but which is easier to explain. 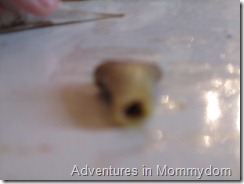 Then I got out my carefully concealed chicken leg bone I’d cut in half.  And I apologize for it being blurry, but do you have any idea how hard it is to get a close-up picture of a bone when the kids are wanting to look at it as well?

So, the inside of the chicken bone is mostly hollow, there’s a rather dried up bit in the middle, which I’m guess to be the marrow. 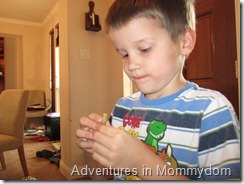 The kids thought this was fascinating and had a lot of fun exploring and playing with the bones.

I did have to caution them they couldn’t feed them to Mac.  Which was rather disappointing to them.

They were also very disappointed when I said I would not cut the cow bone in half for them to see inside it.  I didn’t feel like explaining this was an already cut cow bone.  I did explain that it was too thick for my knife to cut and there was no way I could cut it.

That was suitably impressive.

But, to get back to actual science, then we theorized what did this mean, and finally after much talking and leading they realized the hollow bones helped the birds fly.

I’m a bit behind in making it around to everyone’s posts.  So, if I haven’t commented on your post yet, I’m catching up, but it’s been a busy few weeks.