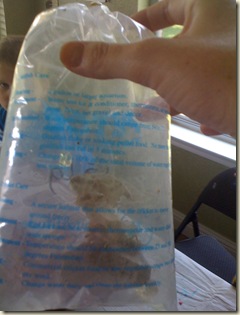 This was one of those experiments that had Jeff and my Mom shaking their head for a while. On Jeff’s day off I made him go with me to the pet store to pick up crickets. Why? To observe them. And we found out all sorts of stuff in the process.
First, in order to keep them alive I had to find out what they eat. I found out they are primarily carnivores, and if you don’t feed them enough protein they will eat the other crickets. 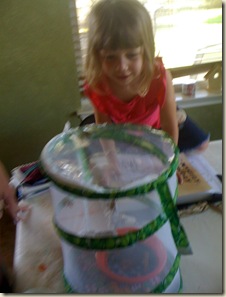 So, we dropped by my Mom’s and confused the heck out of her by asking for a handful of dog food. Then we headed back to the house, and put the crickets in our butterfly pavilion, and the kids had a blast watching them!

What all did we do with them?

We watched them a lot. We noticed they could climb up the walls. Then we read about them and discovered that’s because of their feet. They’re sticky, like a tree frog (that’s Superman’s observation). 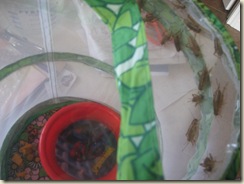 And, they had already eaten one of their own by the time this picture was taken. 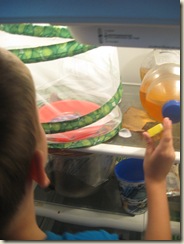 Crickets do not like cold. We repeated our experiment from here. As a side note, I’m thinking we’ll repeat this with the caterpillars that finally came in. They showed the results of cold much better than the roly polies.

After we took them out of the fridge (after accidentally leaving them in way too long), they didn’t move very much. We left them on our table for a while, and they weren’t warming up. 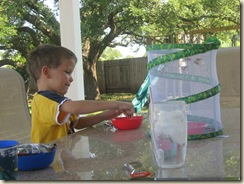 So, I took them outside and they warmed up real fast. And boy were they moving then. That’s when we started keeping them outside. 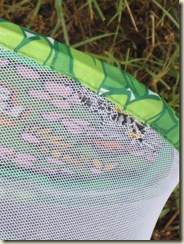 And this picture has less to do with crickets, but something else we learned. Ants like dog food. And they can chew through our pavilion. So, when we went out to observe the crickets that day and discovered the whole thing swarming with ants and all of the crickets up at the top of the cage. That’s when I declared an end to this experiment. 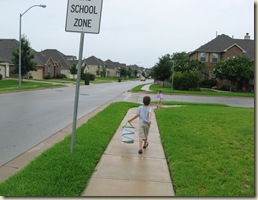 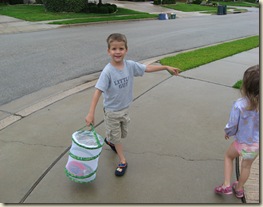 So, the kids happily went with me as we ran through the drizzle to find a good place appropriately far away from our house (so they didn’t come back, that was the deal I made with Jeff). 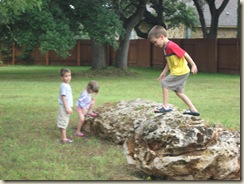 And as with all excursions we do. What would it be without climbing on something? So, they happily spent five minutes or so climbing all over the rocks near the sinkhole.
Until I said it was starting to rain too much, and I wasn’t really dressed to be soaked.

So, that’s our observation of crickets. I’m trying to decide if I want to risk our caterpillars to see how they do with the cold. I’m worried they might not recover like the crickets did. In theory they should, but after waiting so long to get them I don’t want to risk killing them.

As you probably noticed in the butterfly post, I did not end up trying the caterpillars in the refrigerator. Maybe next year.