We’ve been following along belatedly with All Things Beautiful and their mystery.  And a few weeks before Christmas we finished up the mystery together. 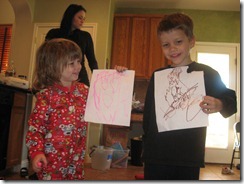 After reviewing what we knew we started on the last few clues.

And this is where things went slightly awry.  Mainly because I went to get my Ph strips that morning and discovered I only had one left………  And only one meant they couldn’t each do it.  So I tested it myself and showed them the results, so they didn’t get to have the fun of trying this experiment.  Instead they got to examine fingerprints and came to their conclusions as to who did it. 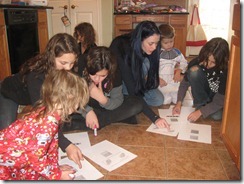 As you can see it took a lot of examination and careful consideration of everything.

Okay, if you don’t want to know our conclusions because you’re saving this for a rainy day activity (and I totally recommend you do it), then you need to stop reading here.

Our conclusions:  Mrs. Scarlett did it along with Mr. Green.  They thought Mr. Green had to of helped her because she couldn’t have carried Mr. Body by herself, and he was the only other person who possibly could have done it (I think this conclusion was partially based on the fingerprints).

You can start reading again, if you’ve stopped.

Things I’ve learned and will do differently next time:

1.  I would probably have waited until all of the posts were done so I could space the “hands on” type experiments a little more evenly between the two sessions.

2.  I would have set up the two sessions closer together.  That was more a scheduling problem on the parents part, next time I’d schedule all of the sessions ahead of time.

3.  I would have a worksheet set up for recording observations for the little guys.  I used the one made for the older guys, but needed to make one for the kidlets.

1.  Pairing older and younger kids together.

3.  Having the Moms split up and supervise the different areas.

4.  Sending the kids outside while we set up, that was crucial for getting it ready without “kid help,” which isn’t as helpful as it might seem.

So, that’s what we’ve learned, and I already have some other ideas I’d like to do at some point.

Anyone else have fun things they’ve done over the break?