This past week we’ve read about all sorts of beetles, from ladybugs to fireflies.  As soon as I realized we were studying them I tried to look up to see if there was any sort of experiment to explain how they light up.
I came up with nothing.  I saw lots of “go out and count how many fireflies you see,” type of thing, but we don’t really have them here in Texas.
So, I decided instead to have us be pretend fireflies.  This worked out super well because one of the episodes of “The Cat in the Hat Knows A Lot About That” was about fireflies so we incorporated that as well. 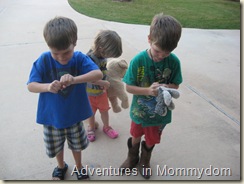 First we got our glowsticks and broke them.  Or rather the kids attempted to, and I ended up breaking them. 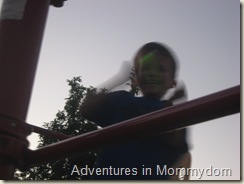 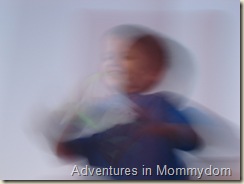 Then we went down to our local elementary school playground and took turns flashing our lights to signal different things.  The boys refused to flash their lights to get a girl to come to them because, and I quote “I don’t want the girl to come and eat me.”  That teaches me for telling them about how some females eat the male of their species.

But, they had a lot of fun flashing their lights to warn about spider webs, or other dangerous things.  I of course was the spider.  Why do I always get to be the bad guy? 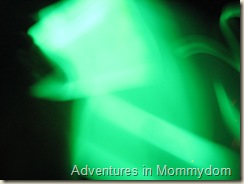 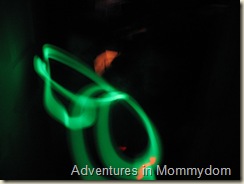 And of course we had to try out the cool effect of waving them around in the complete darkness.

Seriously though the glowsticks were probably a lucky find for explaining fireflies because just like the fireflies glow it’s a chemical reaction and it doesn’t heat up like our lights do.  It’s a very efficient process as far as energy conversion goes.

Downside to this experiment now the kids are trying to convince me I need to let them walk around with them forever.  Oh well.

Have you ever had a lucky find that worked well for you?  I love finding those from time to time.