Also known as, something that probably shouldn’t have been done at the beginning of November, but what the heck, that’s when we finished our study of insects. 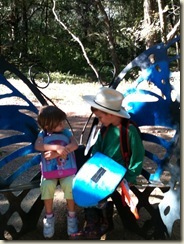 Now, I have a very distinct memory of going to the Zilker Botanical Gardens this spring and seeing an amazingly large numbers of insects.  I noted this and intended to go back and look for more when we were actually studying insects.

Fast forward a few month and I spent a good month and a half playing tag with my friend who I wanted to go with for this excursion, and didn’t really move as fast as I 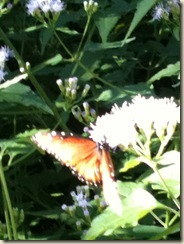 should have.  So, we finally set out in November, yes I meant to write about this earlier, but was feeling lazy and November was crazy.

Our main discovery while we were there was monarch butterflies, which I was perfectly happy with because I love them. 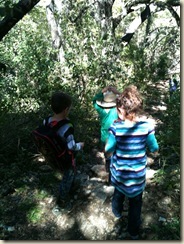 So, our first part having been a dismal failure we continued on to our next part of the field trip.

This was much more successful.  We successfully had a wonderful nature walk where the kids discovered all sorts of stuff, and many different things. 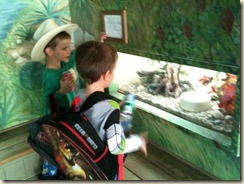 We checked out the natural wildlife in captivity.  Don’t you just love Batman in his hat?  That really cracks me up. 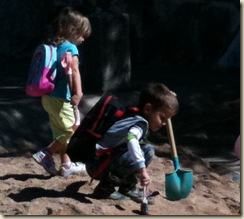 But as always the dinosaur dig was a huge hit, and the kids LOVED it!  And of course were absolutely filthy by the time we got home, so baths were necessary. 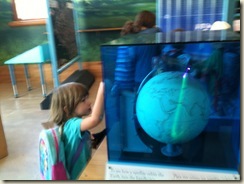 The cool new part for me was the discovery that the Austin Science and Nature Center has a whole new exhibit about weather and air pressure and stuff.  Most of it went over the kids heads, but they enjoyed looking at it. 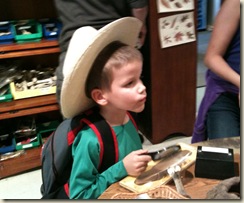 And, the kids have discovered the trade in center where you can bring in cool things you find like plants or rocks and stuff and have the people help you identify it and earn points.  Those points can then be used to trade in for “cool stuff,” read animal skeletons and dead bugs.  I’m okay with the skeletons, not so much on the dead bugs.

And that finally concludes all of our insect studies, all 4 months or so of it……..