So…….  My kids are currently obsessed with Sid the Science Kid.  I put that with many other pre-school kid shows in the “annoying and why must you watch it category,” but I have no valid reason beyond my annoyance with the show not to watch.

Okay, totally unrelated, but I really shouldn’t have eaten those M&Ms the room is spinning most unpleasantly, and this is not feeling good right now.

Okay, back to what I was saying.  We watched an episode about pancakes where he wondered why his Mom’s pancakes were soft and gooey and his Dad’s were hard.  So they look at what would happen to different things that had been heated up.

We decided to do the same thing. 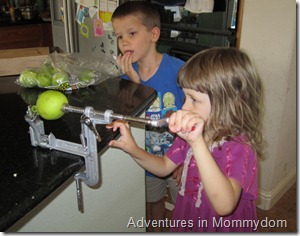 First, we duplicated the experiment in the episode, and we made applesauce.

Of course, since they’d seen the episode they already knew what was going to happen to the apples as we heated them.  They got soft and mushy and we could make them into applesauce. 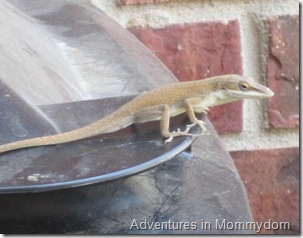 And then we took a break to look at this cool lizard who was sitting on our trash can, and be amazed at the LEAP he took from the trash can to the bushes 18 inches away.  Very impressive.

No clue what he is, that’s an investigation for another day.  We did all discuss what he ate and why he was where he was.  We all agree that we like him eating the bugs and mosquitoes near our house. 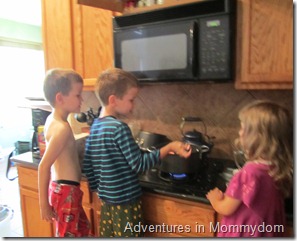 Next, we decided to see what would happen to the marshmallows if we put them over heat.

The kids all agreed they would get soft and mushy like the apples did.  I reminded them that pancake batter didn’t get like that it became harder.  But, they were still quite insistent it would be soft and mushy. 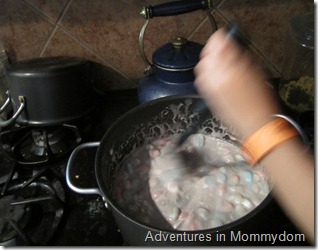 They were kind of right.  They melted completely and totally.  I guess it’s been so long since I did this on the stove that I forgot on the stove they just melt, they don’t expand and get big.  Kind of takes away the wow factor.  Of it, but the kids counted this as being soft and mushy.

They did totally approve of the final product: Rice krispie treats……  Yum, with patriotic star shaped marshmallows, or that’s what they started out as.  By the time it was done they were just a brown mush.  The colors did not mix into the most appetizing of colors.

So, how about you guys?  Any fun science activities or discoveries?  I have to say I’m loving getting email notifications of when people link up because there are some cool things I saw last week.