This is one of those experiments that my kids came up with all on their own.  They wanted to do a “speriment,” and they were quite determined we needed to do one. 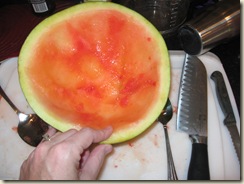 Supplies (as envisioned by Batman): one watermelon emptied out of stuff; that white stuff that makes things explode (baking soda), pickle juice, and finally vinegar (you know the stuff in the big jar), oh and the white stuff you shake on my carpet to make it not smell bad (carpet cleaner or sometimes baking soda).

Do you know how hard it was to guess what he was referring to? 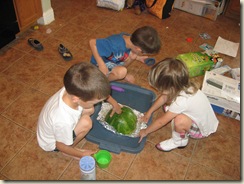 First, cut a hole in the top of your watermelon and then put it on a cookie sheet to contain most of the mess.  I also put it on top of aluminum foil and wrapped that up around it, to help Batman get the results he wanted. 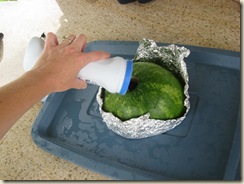 At first we couldn’t find baking soda, so we tried the carpet cleaner with pickle juice (also known as salt water).  This didn’t get the reaction Batman was hoping for.  So we tried vinegar and that also didn’t react. 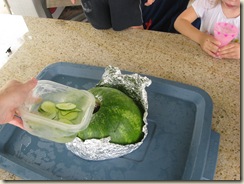 So, we went on a shopping trip to get more baking soda.  Of course when I got home I found two big boxes that I swear were invisible before.
Again we tried the “pickle juice,” and it didn’t react as I predicted, and as Princess and Superman predicted.  Batman then insisted we needed to get out the vinegar. 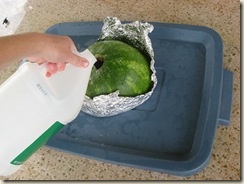 Which of course did erupt as Batman had hoped, though not as much.  I think this is partially due to the fact that (and I looked this up a few weeks ago, so I may be misremembering), but watermelon is one of the more alkaline fruits. 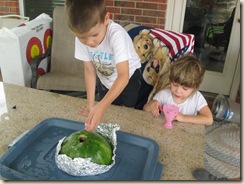 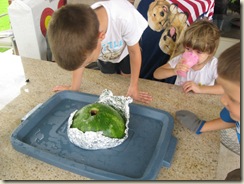 But Batman got his money shot and got to see it all erupt, and so he was happy.

Do your kids ever come up with an experiment on their own?