Since our school work this week pretty much was student directed, what with my running around like a madman trying to put together funeral arrangements, I thought to show you what was the result around my house of the flooding. 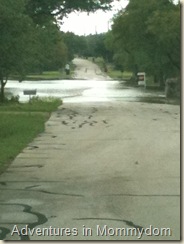 So, this is taken with my phone through the car windshield.  All of the roads around my house have many different creeks running across them.  So, this is a residential street, and as you can see the road is completely flooded.  Several houses in the area had to be evacuated.  What was previously not in the 100 year flood plain is again.

One of the major roads in the area was flooded.  I thought about taking a picture, but figured it’d be bad to do when most of the road is closed down, and it’s down to two lanes and we’re theoretically going 65.

Sometimes I do show the better part of valor, i.e. discretion.  Rarely. 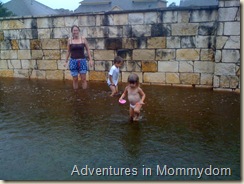 And someone asked about my backyard.  The flooding probably got to about two feet tall at its highest over by the fence.  Our yard is graded to keep water away from the house, so while the back part was fairly deep in water (as you can see from last year’s flood), by morning it was down to about ankle height. 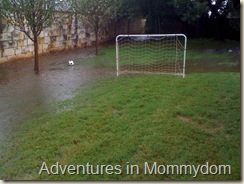 My theory on the flooding, this is part of why the Southwest gets so much flooding.  The ground tends to get dry and baked, and we tend to get torrential amounts of rain.  Because of how quickly all that rain comes it can’t be absorbed by the ground as quickly as it comes down, so it puddles up on top of the ground.

For those who are curious we did an experiment earlier that covered a little of this.

And for those who are wondering, the memorial service for my step-father was yesterday, and so in theory life should be getting back to normal, maybe.  Probably not, because I’m discovering there is a lot to do when someone dies unexpectedly.