And today I have an extra button because our activity is inspired by this AWESOME series of posts on All Things Beautiful.

So, one of my friends from way back when I was a young whipper-snapper is also homeschooling and lives just up the road from me.  Her kids are a little older than mine and so this makes it a perfect arrangement for things like this.

So, we all got together, and I set up the first three weeks of experiments as different stations throughout the house.  Here’s the general set-up we had.

First I read through the introductory information and what all was going on and the different witness statements.  Then after each witness statement the kids gave me what information they had gathered from this and their theories.  My kids theories had a lot to do with Scooby Doo, and not so much to do with the actual mystery……

Next they splut, or maybe split up into teams at the different stations.  There were two that were observation and writing, solving whose footprints were in the paint (and if you click on the button above you’ll know what I’m talking about).  And figuring out who the hair and fiber samples belonged to. 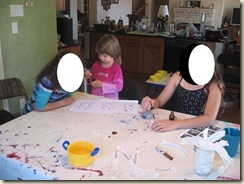 Next they used chromatography to figure out what the ransom note was written with.

For anyone planning on doing this, learn from my mistakes.  1.  You can dilute the ink it does not need to be straight food dye, which for some reason I was thinking wow that’s a lot of food dye for this.  2.  Do not trust your almost 4 year old with the bottle of ink, she will drop it all over the floor and your jeans and your formerly white shoes. 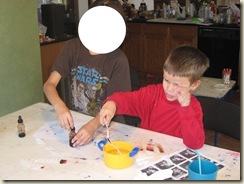 Then they proceeded to figure out the white powder, which was probably the most popular experiment of them all, since it didn’t require patience like the chromatography does.

Afterwards the older kids did have some pretty insightful guesses as to who it is.  Our general agreement is the cook did it.  But, the evidence so far is not conclusive, and I personally think she might have had an accomplice.

We’ve had a blast with this, and are looking forward to completing it after Thanksgiving.

So, has anyone ever does a science mystery like this?  I know Phyllis obviously has since she’s organizing this fun shindig, but anyone else?  I did one time back when I was teaching, and it was a blast!

PS:  Other kids faces are blacked out because I forgot to get permission to put their pictures up here……  Oops.