This is the cry I heard as I innocently sat at my computer last week, “Mom!  There’s a dead bird in our back yard and Mac’s chewing on it.”

Now, I hadn’t fully woken up yet, and was still blinking at the computer screen.  But, I was galvanized into action, and immediately said, “Put the dog inside, and follow me.” 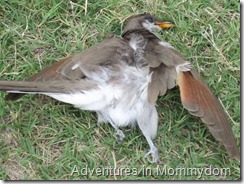 Yes, I said that.  I grabbed my camera, and a handful of bamboo skewers because I sure as heck wasn’t going to let them pick up the dead bird or touch it.  But, think of what we could observe! 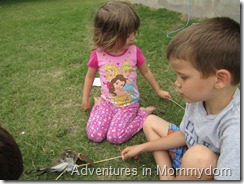 Equipped with our handy dandy bamboo skewers we proceeded to gently examine the bird.  I tried to treat it with as much respect as possible, so we didn’t really poke it, just used the skewers to move feathers and point to things. 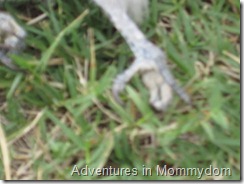 First we noticed that his toes pointed different ways.  After much discussion we decided this was to help him grab onto branches and balance better.  It’s rather like how our thumb points a different way from the rest of our fingers. 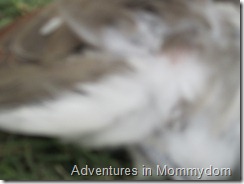 Then we talked about how the bird was missing feathers, and what could have caused that.  I personally think the bird was old, and just couldn’t survive much longer.  The kids of course blamed various different animals for killing the poor bird. 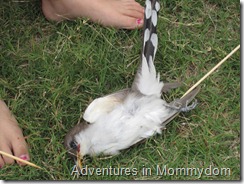 Then we looked at his other side and noticed his feathers were different colors there and talked about how that is a form of camouflage because someone looking up when he was flying would have a harder time seeing him against the bright sky.

We also noticed there was a bit of blood around his eyes.  Which really was quite disturbing.  Then I took away the poor bird and disposed of him properly before any other animals tried to eat him more.  Poor guy.

And before I could stop them the kids ran around and collected a rather large number of feathers they found all over our yard.  I gathered those up into a bag that “I’m keeping somewhere special” and sent them in to wash their hands 5 times with soap and hot water.

Because yes, it was gross.  And yes, there was a definite oogey factor, but I also knew they were going to be talking about it and wondering about it anyways.  Might as well get a science lesson out of it. 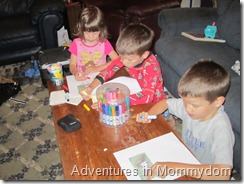 Afterwards I set them to drawing something they observed about the bird.  They were quite sure they wanted to bring in the feathers to the Nature Center so they could trade those in and get “an animal skull.”  Yeah…….  We’ll see.

We did not however get a science lesson from the partially pulverized dead snake we found in the yard.  That went straight into the trash.  I was more weirded out by that one because I had started off thinking it was a discarded skin, only to discover it wasn’t.  EWWWWW!

Oh and, if you only check the linky on Sunday, I highly recommend going back later in the week and seeing the posts added in later on.  There’s always some fun ones added in as the week goes on.