So, we read a book about Salt Lake, which I can’t type at all for some strange reason.  And we all wondered if we could add enough salt to make things that don’t normally float in water float, like they do in the Great Salt Lake. 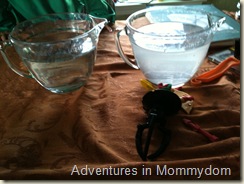 Hypothesis: If we add enough salt our toys that don’t float will float.

Supplies: two big bowls, water, salt (we probably added half a cup), some toys (they chose their Happy Meal toys) 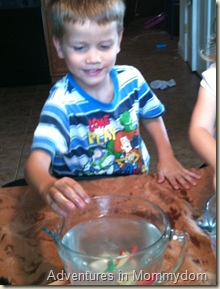 Procedure:  First add the toys to the plain water and observe if they floated.  Then put them in the salt water.  In theory the salt should add enough buoyancy for something to float. 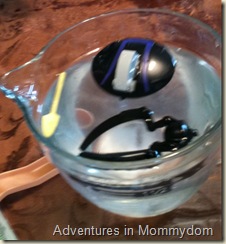 My theory: We weren’t able to add enough salt.  I tried to saturate it with as much salt as possible, but I didn’t heat it, which could have let me add more salt (as I recall from high school chemistry), but I didn’t want to then have to wait for it to cool.

So, the experiment didn’t turn out as I wanted, but it was interesting.

It sounds like in general that I’m not the only one who had a week of things not going quite as we wanted.  Sigh, some weeks are better than others.