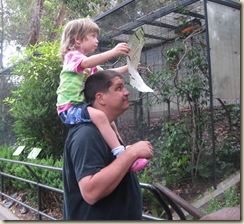 I’m doing this as a two part post.  Today will be the zoo, and the fun learning aspects of it.  Tomorrow will be cute fun pictures, because what’s a zoo without fun pictures of your kids.

The San Diego Zoo is a bit intimidating.  There’s like a million people there, and buses driving all over, so it’s sometimes a little scary figuring out where to go.  So we went for the wander around approach. 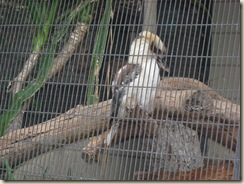 We had fun looking at the animals and figuring out where they lived.  For instance the kookaburra lives in Australia, and its call is used to discourage other birds from coming to places (I know they’ve used it in Texas). 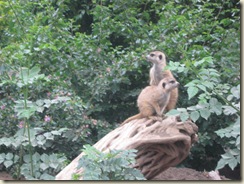 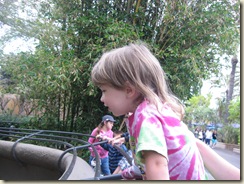 We spent a lot of time studying the meerkats.  There are all sorts of tunnels all throughout their enclosure that they’ve dug, and we were trying to figure out how the holes get filled back in.  I was wondering if they had someone doing that as their job, and Jeff theorized it probably just collapses from the weight of the dirt above.  Then I realized his theory made so much more sense. 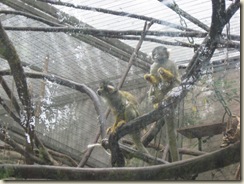 The kids were excited to see Ring-tailed Lemurs because they see them all the time on “Penguins of Madagascar,” (actually I don’t think these are that particular breed, but a similar one), we were intrigued to see the different fruits and what have you that were left on the cage floor for them to eat (I’d show you the picture, but I was only able to get the monkey’s but, and that’s not so fun to look at). 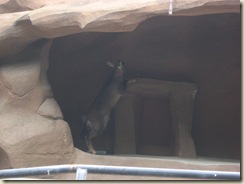 One of my complaints about the zoo, is they set it up in the most realistic way possible, which meant you often couldn’t see the animals because of the way the cages were set up.  So, a lot of the animals turned into a hunt and peck to find them.  I think it took us a few minutes to find this wallaby (I think it’s a wallaby picture). 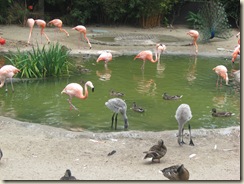 This rather intrigues me because these are baby flamingoes (the gray birds).  They turn pink because of the shrimp they eat, and these haven’t eaten enough yet.  I wonder if you fed an adult flamingo a different diet would it change color?  In theory it should.
Also, it was intriguing to see the island full of flamingo nests.  They’re about 2 feet tall and cone shaped.  It was so interesting to see. 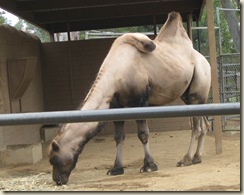 We spent a long time discussing why many of the camels in the zoo had their humps laying over to the side like in this picture, and after looking at several different websites I found this one, which said basically it needs more food or water.  If it’s well fed and has enough both of the humps will be plumb and standing up. 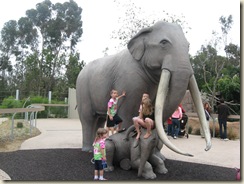 I had this great video of one of the elephant caretakers explaining what she was doing, but you can’t really hear what she’s saying.  Basically one of the elephants (obviously that’s not a picture of the REAL elephant) had injured it’s leg, and she was waiting for him to come over so she could feed him a pail of bran and IB-profin to help with his pain and swelling.  The funny part is one of the other elephants in the enclosure knew it was there and kept trying to steal the pail from her, so she kept almost getting knocked over and then having to move the pail.

Oh, and something I wanted to make sure to mention.  In case you weren’t aware most zoos and museums on their websites have lesson plans to make your visits better, including suggestions of things to do before, during, and after your trip.  I didn’t really get to look at the San Diego Zoo’s site, but I know the Waco Zoo has a bunch of cool scavenger hunt things to do.  Just thought I’d let you know.

And now that you’ve read my wall of text, what’d you guys do?  I’m going to try my best to make it to everyone’s posts from the past few weeks now that I’m home, no guarantees I’ll make it this week, but I’m going to try………

Stay tuned tomorrow for cute pictures of the zoo, including an incredibly cute baby, who you won’t really get to see……