We have an absolutely amazing nature center here in the Austin area.  If you are ever vising here I highly recommend it.

It’s calming, it’s a rescue zoo for local animals that can’t be adapted back to the wild, and the thing my kids were obsessed about recently, you can trade in your nature finds to get different ones, mainly skeletons.

Or that’s all my boys wanted. 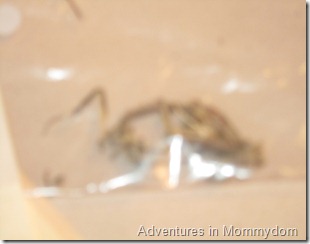 A few weeks ago we saw a dead lizard being eaten up by a swarm of ants.  This made for a quick fascinating nature observation.  Especially when a few days later we saw that now the lizard was just a skeleton.

So, Superman quite happily scooped it up into a plastic bag and spent the next two weeks begging to go down and trade it in.

He and his brother and sister also scooped up a couple of pocketfuls full of rocks and proudly took them to the nature counter. 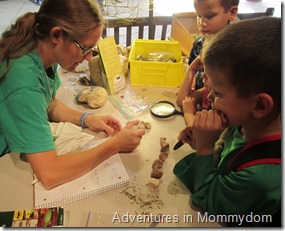 She took the skull out and let them observe it and talk about what they knew about the lizard.  The kids remembered it was greenish brown with some blue.  So she got out her reptile and amphibian book and found a green anole for us.  Then we found out what it was and we got to talk about it for a while.

Then came the cool part.  Or to me. 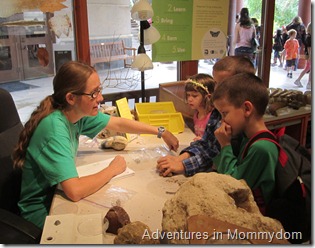 Then we started talking about the rocks and she explained about how most rocks in our area are limestone and a lot of these rocks looked like limestone.

And to make sure she pulled out an acid (HCl) and put a drop on each one.

It bubbled up just like baking soda and vinegar does.  So, over half of our rocks were limestone.

Now, according to her if I put some vinegar on limestone it will react the same way, just not as impressive.  I’m eager to find some limestone to try. 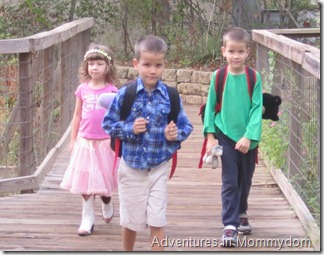 Then we headed off to take lots of pictures for our hero story, which is the subject of another post someday…….

DON’T FORGET TO ENTER MY GIVEAWAY!  Great way to encourage writing with their own personal paper.