So, let me tell you about my attempt at having a fun learning day on Friday.

We actually left and headed to go down to the Austin Children’s Museum fairly promptly……  That should have been my clue it was not going to go well.

First we get about halfway there and Jeff calls me to let me know I left our very carefully packed and prepared lunches at home.  So, turn around and get the cooler full of lunches.

Then we’re almost there and I get pulled over for speeding.  I hadn’t seen the speed limit sign go down.  When the officer looks in the back he thinks Princess isn’t buckled properly, so he has to check the law to find out.

Meanwhile the boys in the back start crying pitifully and saying they NEED to go to the bathroom.  And I’m sitting there thinking I can’t do anything about this.

Finally 10 minutes later we get going again.  I pull off at the first likely exit, and we head into the gas station.  And there is no toilet in the bathroom.  There’s a very large ladder, but no sign of the toilet.

Okay, we’re almost to the museum, we’ll just go there.

And then I miss the exit.  So, I take the next exit after I realized it.  Only to be stopped because of a funeral procession.

And the whole time the boys are telling me that I got us lost and “Mom you need to turn around.”

We finally get to the kid museum, and I think awesome it’s an exhibit on motion there’ll be all sorts of things we can talk about.

So, what do we spend almost all of our time there doing? 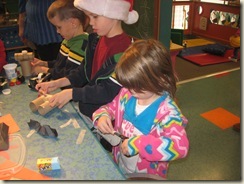 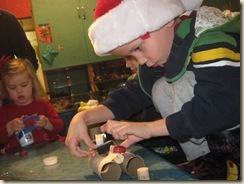 We made stuff, for over an hour.  I finally had to say we’re leaving this area.

But, the most amusing part to me is Batman’s rendition of how Jeff cook steaks.  If this has any truth I’m a little worried about the steaks. 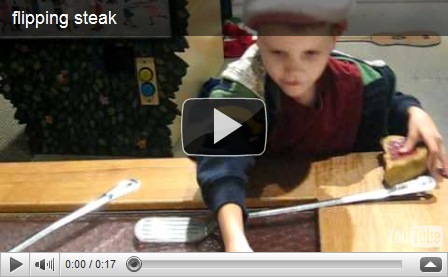 And I had an actual experiment I had planned to do that afternoon, because for one reason or other it hadn’t worked out to do it earlier.  But, by the time we got home I was just done, so there was no experiment………

And there will be no Science Sunday post for next week to take some time off for Christmas.  If you have a post feel free to link it up to this one or the next one.