We’ve started our next science book, Exploring Creation with Zoology 2: Swimming Creatures {affiliate link}.  Or as my kid call it “The Ocean science book.”

The first chapter is basically setting up what the ocean is like.  So, we first read about plankton, and many other things, and then we got to currents, and I remembered All Things Beautiful having a wonderful ocean currents experiment and all sorts of things (she has older kids, so went into a lot more detail). 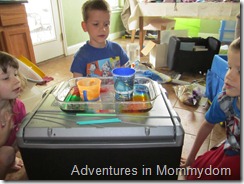 So, we happily set up our ocean currents and our oh so official land masses for our experiment.

For full explanation of set up and science head over to All Things Beautiful, but here’s my kid’s observations: 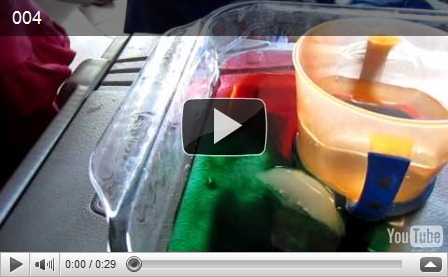 what happens when an ice cube is added

And after talking about that for a little while we did the next step of our ocean currents experiment. 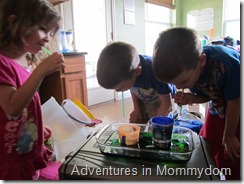 Blowing on it, to simulate wind and other surface events that affect the oceans.  It was hilarious seeing them blow it all over and their amazement at the colors mixing.  Then we talked about how someone in the United States could drop trash in the ocean and how that could affect someone in Africa.

In our science book there was a hilarious example about a boat carrying Nike shoes that sunk in Atlantic Ocean Gyre.  Scientists were rubbing their hands in glee as they theorized what would happen to the shoes, and they got to watch as the shoes moved exactly where they predicted.

Of course they didn’t really say how it got cleaned up, but it was a great example of how something that is dropped in one place can

Quick reminder to those of you linking up:

2.  Please remember to put a link back to Science Sunday.  Either put in the button, or just make a word hyper link.