As I mentioned on Friday, we’ve had wildfires galore here, and it’s been the topic of conversation off and on all week long.  I just found this great article about talking to your kids about major events, and having read over it I’m glad I handled this the way I did.

Goal: to learn how fires spread and how to put them out.

First I talked with the kids about the  fires in the area and did a lot of reassuring them that the fires are not currently anywhere near our house. 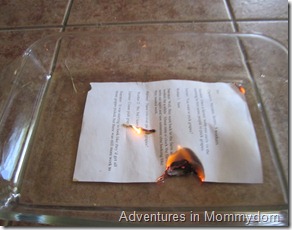 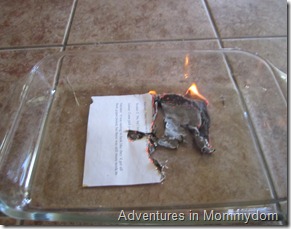 Then I put a piece of paper in the pan and lit it on fire in several places.  We discussed how the fires burn, and it doesn’t always go in a straight line, or where you expect, how there are some places that aren’t burned at all, and then some that are completely destroyed. 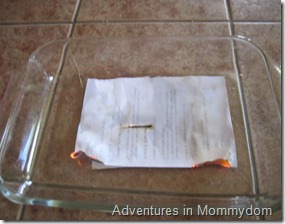 Next we talked about how the fires wouldn’t spread as much if there’d been even a little rain.  So I got the paper a little wet, and it burned some, but for the most part it didn’t burn very much.  This is why we’ve been praying for rain. 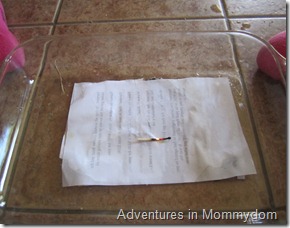 After that I talked about how if it had been raining A LOT that would be even more protection, and I completely and totally soaked that paper.  There wasn’t a dry spot anywhere.

It never caught fire.  I tried and tried and it wouldn’t catch fire. 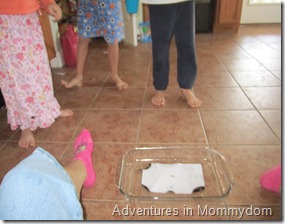 Next we tried different ways to put out the fire.  First we did the way everyone expects and poured water on it.  The fire went out like a light. 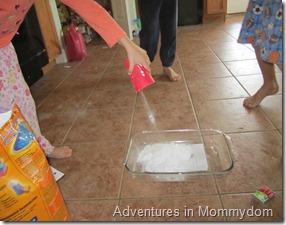 Finally we talked about how some fires can’t be put out by water, but need chemicals and we poured baking soda over it.

We also could have tried smothering it, but I thought this was a good way to go about the lesson since the others required being nearer to the fire and the kids were already starting to turn this into a play session.

Which then led into a fire safety lesson………….